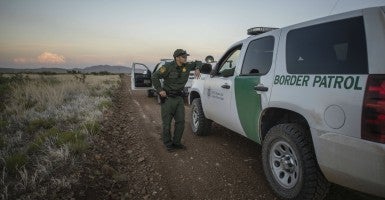 According to two recently released studies, the vast majority of illegal immigrants who are in the U.S. will not be the focus of deportation operations. (Roberto E. Rosales/ZUMA Press/Newscom)

A new study has found that of the unauthorized immigrants in the U.S. already, most of them will be spared from deportation under Obama’s recent executive actions.

A report released last Thursday from the Migration Policy Institute, a nonpartisan think-tank in Washington, found that 13 percent of an estimated 11 million immigrants without papers—1.4 million people—have criminal records or recently crossed the border into the U.S. illegally.

Under the Obama administration’s new deportation guidelines, announced in November and put into effect July 1, these individuals will be a priority for deportation.

Consequently, according to Marc R. Rosenblum, author of the report and deputy director of the United States immigration policy program at the Migration Policy Institute, refocusing enforcement policies on this select group “would effectively offer a degree of protection to the vast majority—87 percent—of unauthorized immigrants now residing in the United States.”

The report estimates that if Obama’s November 2014 enforcement policies are followed, there will be a reduction of deportations from within the U.S. by about 25,000 cases annually.

The 13 percent of unauthorized immigrants in the U.S. who are now considered “enforcement priorities” has dropped from the 27 percent who were the focus of deportation efforts under the 2010-2011 policy guidelines.

Obama’s announcement of executive action on immigration in November of 2014 includes two key policy changes from which the results of the report come.

First, the Department of Homeland Security issued new policy guidance on which categories of unauthorized immigrants and other potentially removable noncitizens are priorities for enforcement.

The second major change in the administration’s policies that the report addresses is the replacement of the Secure Communities information-sharing program with the new Priority Enforcement Program (PEP), which focuses on targeting individuals convicted of significant criminal offenses.

Homeland Security had to shut down the Secure Communities program after federal courts ruled that its requests to local police departments to detain immigrants were unconstitutional.

Republican lawmakers are not satisfied with the Priority Enforcement Program as its replacement, saying that it undermines agents’ ability to enforce immigration laws since it authorizes the transfer of individuals only in specific, limited circumstances.

If these new federal programs are carried out efficiently, Rosenblum said, “[i]mmigrants who have long been living in the U.S. and are not committing crimes will receive a degree of protection and likely will not be facing deportation.”

The report clarifies that removals at the U.S.-Mexico border remain a top priority under the 2014 guidelines. Rosenblum speculated that “falling interior removals may be offset to some extent by increases at the border.”

Meanwhile, another new study shows that the number of people emigrating from Mexico to the U.S.—both legally and illegally—has dropped sharply in recent years.

Rogelio Saenz, dean of the College of Public Policy at UTSA and lead author of the study, listed three explanations for the drop in immigration: there are fewer construction jobs in the U.S. due to the 2007-2009 recession, Mexico’s economy is growing and there is a falling birth rate.