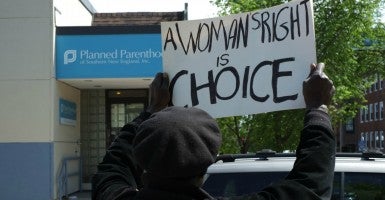 Democratic members of Congress have requested an investigation into the Center for Medical Progress after the group released two undercover videos of Planned Parenthood executives discussing the price of fetal organs. (Photo: Jesse Nemerofsky/ZUMAPRESS/Newscom)

Democratic members of Congress have requested an investigation into the Center for Medical Progress, the group behind two undercover videos of Planned Parenthood executives.

The Center for Medical Progress has released two undercover videos in its “Human Capital” series, depicting two senior Planned Parenthood executives discussing the price “per specimen” of fetal organs such as hearts, lungs and livers.

In a series of statements, Planned Parenthood has called the videos “heavily edited” and has denied that it profits from its “tissue donation” program.

The Center for Medical Progress has made the full footage of each meeting available on its YouTube account.

On Wednesday, four members of Congress sent a letter to U.S. Attorney General Loretta Lynch and California Attorney General Kamala Harris requesting that they launch an investigation into the Center for Medical Progress.

“We are writing to request that you investigate whether any laws were broken by individuals who participated in an elaborate, multi-year scheme to impersonate corporate officials from a fake biologics company, secretly filmed video of a Planned Parenthood physician in California, and make public portions of the video without her consent,” the members wrote in the letter. Rep. Jan Schakowsky, D-Ill, is among the lawmakers requesting an investigation of the group behind the Planned Parenthood videos. (Photo: Tom Williams/CQ Roll Call)

They accuse the “anti-abortion group” of creating “a fake corporate entity” in order to “falsely impersonate corporate executives and ‘gain access’ to meetings with Planned Parenthood officials.”

The full text of the letter is available on Schakowsky’s website.

In the joint statement, the representatives urged Lynch and Harris to investigate the case.

“This is a new low, even for anti-abortion activists who will stop at nothing in their effort to undermine a woman’s right to choose,” Schakowsky said. “I believe the Center for Medical Progress may have broken the law in developing and executing this unbelievably elaborate and troubling scheme, and all Americans should have concerns about that. I hope that Attorneys General Lynch and Harris will investigate this case.”

“Planned Parenthood is a well-respected and important organization in my community,” Lofgren said. “One in five women in America has gone to Planned Parenthood at some point in their lives. The recent surreptitiously recorded video is the latest iteration of harassment and partisan attacks on Planned Parenthood which have become far too common, and raises serious legal questions that merit an investigation into whether the so-called ‘Center for Medical Process’ has broken the law.”

In a statement, the Center for Medical Progress said that Planned Parenthood and its allies are persecuting the “citizen press” and suppressing “free speech”:

“Planned Parenthood is trying to use the power of their political cronies to shut down free speech, to silence the freedom of the press, to persecute David Daleiden, and to save their half-a-billion in taxpayer money and avoid accountability to the law and the American people.”

In the same statement, Daleiden said:

“Planned Parenthood and their political allies know our investigation has revealed the truth about the gruesome and horrific practices of partial-birth abortions and selling baby parts taking place throughout their organization. They will attack me and my organization all day long, but that does not change the facts about what our investigation has uncovered and what the American people now know—that Planned Parenthood is engaged in an enterprise-wide operation that traffics and sells baby body parts.”

The Daily Signal has previously reported that Planned Parenthood frequently donates to pro-choice candidates through its PACs and affiliates.

According to data provided by the Center for Responsive Politics, during the 2014 election cycle, Schakowsky received $3,830 toward her campaign from Planned Parenthood. Nadler received $1,000.