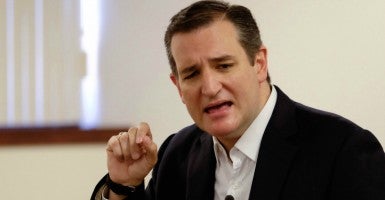 On Wednesday, Sen. Ted Cruz introduced a resolution to rename the street in front of Cuba’s embassy in Washington, D.C. after slain Cuban dissident Oswaldo Payá.

Often described as the Nelson Mandela of Cuba, Payá, along with  fellow dissident Harold Cepero, was killed in a car accident in 2012. Payá’s death is widely believed to have been a premeditated attack by the Cuban government.

This is not the first time the Texas Republican has stood up to authoritarian regimes. Last year during the 25th anniversary of the Tiananmen Square massacre, Cruz requested to rename the area in front of China’s embassy the “Liu Xiaobo Plaza” after an imprisoned Chinese human rights activist.

Wednesday marks the third anniversary of Payá’s death. To this day, there has never been an independent investigation into his and Cepero’s deaths, and the Cuban government has never been held accountable. The Castro regime’s complicity and downright attacks against human rights activists have become all too common.

Payá was known throughout the world as Cuba’s leading pro-democracy figure. In 2002, the European Parliament awarded him the Sakharov Prize, and in 2005, he was nominated for the Nobel Peace Prize by Václav Havel, the former president of the Czech Republic.

The Cuban government’s complicity in the attack against Payá has been speculated about even at the highest levels of government. Secretary John Kerry himself said, “Given the Cuban government’s ongoing harassment of Mr. Payá, an impartial, third-party investigation into the circumstances surrounding the death of Oswaldo Payá is necessary.” The Human Rights Foundation recently concluded the first ever legal investigation into the case of Payá, which found:

… the events of July 22, 2012 were not an accident—as quickly claimed by authorities in the state-owned media monopoly and later rubber stamped by Cuba’s totalitarian court system—but instead the result of a car crash directly caused by agents of the State, acting (1) with the intent to kill Oswaldo Payá and the passengers in the vehicle he was riding (2) with the intent to inflict grievous bodily harm to them[.]

As of yet, the Obama administration has not included Payá’s case in its normalization bid with the Cuban government despite numerous pleas by the Payá family.