Why I Refuse to Acknowledge the US Embassy in Havana 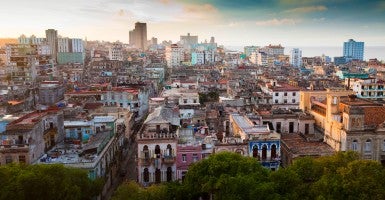 To this day, there has never been an independent investigation into their deaths, and the Cuban government has never been held accountable. The Castro regime’s complicity and downright attacks against human rights activists have become all too common.

Earlier that same year, Amnesty International prisoner of conscience Orlando Zapata Tamayo died in prison after the Cuban government denied him water during a hunger strike. The following year, a founder of the Ladies in White, Laura Inés Pollán, died following what is widely suspected to be poisoning by the Cuban government. Their murders were particularly audacious, since they were some of Cuba’s best-known dissidents.

These heroic figures presented a direct threat to the regime. In 1988, Oswaldo Payá founded the Christian Liberation Movement, the largest and arguably the most powerful dissident organization on the island. Founded by Catholics, the organization was founded on the belief of human dignity and democratic governance.

Perhaps Oswaldo Payá’s greatest contribution to Cuban freedom was the “Varela Project,” an initiative in which 11,000 brave Cubans petitioned the Cuban government for political and social freedoms. It should be noted that at the time, the “Constitution of Cuba guaranteed the right to a national referendum on any proposal that achieved 10,000 or more signatures.” This heroic effort was absolutely unprecedented in Castro’s Cuba.

Payá was known throughout the world as Cuba’s leading pro-democracy figure. In 2002, the European Parliament awarded him the Sakharov Prize, and in 2005, he was nominated for the Nobel Peace Prize by Václav Havel, the former president of the Czech Republic.

Following his death, the U.S. Senate “unanimously approved a resolution honoring the life and legacy of Oswaldo Payá.” That resolution included a call for the “[g]overnment of Cuba to allow an impartial, third-party investigation into the circumstances surrounding the death of Oswaldo Payá Sardinas.”

Earlier this year, in testimony before the Senate Foreign Relations Committee, Payá warned the Obama administration:

The Cuban government wouldn’t have dared to carry out its death threats against my father if the U.S. government and the democratic world had been showing solidarity. If you turn your face, impunity rages. While you slept, the regime was conceiving their cleansing of the pro-democracy leaders to come. While you sleep, a second generation of dictators is planning with impunity their next crimes.

Any decent person should be morally outraged that the White House has allowed Oswaldo Payá’s death to go unpunished. Next week, while Obama’s diplomats celebrate alongside their Cuban counterparts, I’ll be lighting a candle in the memory of Oswaldo Payá.