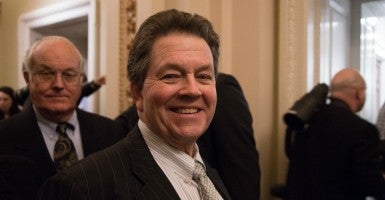 Economist Art Laffer, known as the intellectual architect behind Reaganomics, spoke at The Heritage Foundation July 20, 2015 about the relevance of his supply-side theories today. (Photo: Jeff Malet Photography/Newscom)

Arthur Laffer sat at dinner with Ford administration officials Dick Cheney and Donald Rumsfeld 40 years ago, sketching his tax policy theory in sharpie on the back of a cloth napkin, declaring that tax cuts would stimulate the floundering economy.

The napkin drawing etched Laffer’s name as the intellectual architect of Reaganomics and spurred a supply-side economics revolution.

As the 2016 election heats up, Laffer’s ideas are resurging as his schedule is lined with Republican presidential hopefuls looking to incorporate the party’s labeled “tax guru” in their economic platforms.

But Laffer refuses to ascribe his theory to one party, recounting a conversation with his neighbor Al Gore a few weeks ago in which the former Democratic presidential nominee told him the best bill he voted for in economics was the 1986 tax cuts.

Laffer underscored other notable Democrats, including Joe Biden, Harry Reid and Barbara Boxer, who also added their names to the 97-3 roll call, claiming they did it because it was “the right thing to do.”

Laffer joined The Heritage Foundation’s tax expert Steve Moore Monday to resell the pertinence of his Reagan-era tax cuts during a Heritage panel discussing the need for tax reform.

“We are at a stage in our history where we need a low-rate, broad-based, flat tax,” Laffer said, repeating the mantra throughout his talk.

He began with a cost-benefit analysis, pointing to John F. Kennedy’s tax cuts in the 1960s, where the highest marginal income taxes were dropped from 91 to 70 percent and the lowest from 20 to 14 percent.

This cut, Laffer continued, reaped the greatest cost-benefit ratio for those in the highest tax bracket, giving them a steeper incentive to work because they were able to keep more of what they worked for.

“The reason you cut tax rates on highest group is not because you love rich people … it’s because you get more bang for the buck,” he said.

“Whenever you redistribute income, you lower total income. Period,” he said.

To Laffer, a flat tax solves this problem, encouraging work by overhauling the entire federal tax code and replacing it with two taxes: a sales tax and a flat income tax.

Laffer predicted that this overhaul would ignite “the boom of all centuries.” To him, the timing could not be more right.

“American people feel the tax system is so corrupt right now and filled with special interest provisions,” he said. “If you wipe out all those special preferences, you’re going to take power away from Washington and replace it to the people.”