The Pathway Out of Paris 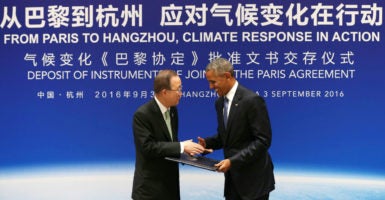 As climate negotiators work out the details of the Paris Agreement on global warming in Marrakech, Morocco, the question on everyone’s minds is: What will the Trump administration do?

The president-elect has expressed skepticism about the Paris Agreement, and for good reason. American households and businesses will incur higher energy costs and a weaker economy while not seeing meaningful change in global temperatures.

Here are three steps the new administration should take to unwind Paris:

1. Withdraw from the United Nations Framework Convention on Climate Change. In 1992, United Nations member states attended the Conference on Environment and Development. More commonly known as the Rio Earth Summit, the meeting led to the signing of the framework convention.

The purpose of the framework convention is to stabilize man-made greenhouse gas emissions to prevent “dangerous anthropogenic interference with the climate system.” This widespread international approach has been costly, ineffective, and unworkable.

Doing this would withdraw the U.S. from any protocol to which it is a party (including Paris) and would enter into force one year after the depositary receives the notification of withdrawal.

In this manner, the U.S. could be out of both the Paris Agreement and the framework convention as early as Jan. 20, 2018.

2. Dismantle domestic regulations that are all economic pain, no climate benefit. As part of its Intended Nationally Determined Contributions, the Obama administration announced plans to reduce U.S. greenhouse gas emissions in 2025 by 26 to 28 percent relative to 2005 levels.

While the U.S. Intended Nationally Determined Contributions is nonbinding and the administration emphasizes that the U.S. “does not intend to utilize international market mechanisms,” the plan outlines a litany of domestic regulations that the administration has proposed and implemented during President Barack Obama’s time in office so far.

The heart of the Obama administration’s climate plan is carbon dioxide regulations on new and existing power plants, though it has also included methane regulations, fuel efficiency standards for cars and trucks, executive orders to reduce GHG emissions in the federal government, and more.

The administration also rejected the Keystone XL oil pipeline and placed a moratorium on new coal leases on federal lands based on climate concerns.

To avert the final rules submitted after May 31, 2016, Congress and the incoming administration should use the Congressional Review Act. The act creates a window of 60 legislative days for Congress to introduce a resolution of disapproval to overturn a regulation. Typically, the president who introduced the rules vetoes the resolution and the process amounts to nothing more than a symbolic gesture.

A new administration changes that. For final rules submitted before May 31, the administration should immediately begin the process of unwinding the existing regulations.

3. Prohibit taxpayer funding for large wealth transfers. An important part of the Paris Agreement (and most international agreements) is money. More specifically, it is how to spend other people’s money.

In November 2014, Obama also pledged to commit $3 billion to the Green Climate Fund, an international fund for green projects in the developing world.

The administration and proponents of the Green Climate Fund have repeatedly called for spending $100 billion per year between the United States and other countries in public and private financing to combat climate change.

And in March, the Obama administration made a $500 million taxpayer-funded payment to the Green Climate Fund despite Congress never having authorized the funding.

The Green Climate Fund is nothing more than a taxpayer-funded wealth transfer from developed countries to developing ones. The fund will do little to promote economic growth in developing countries but instead funnel taxpayer dollars to politically connected companies.

The next administration should reject calls for international climate funding and actually work to raise standards of living for people in this world who still live without access to reliable power and are still cooking with dung.

The Paris Agreement, and U.S. participation in the entire Framework Convention on Climate Change, is a raw deal for Americans. The resulting domestic regulations will drive energy bills higher and will accomplish no meaningful change in global temperature.

Remember, even Secretary of State John Kerry admitted during the negotiations last December that:

The commitments the developing world made during the Paris negotiations cannot be trusted as meaningful carbon dioxide cuts. Nor should they be. The cost of allowing third-world poverty to persist—and the role that energy development can play in alleviating that poverty—is far clearer, more threatening, and more easily solvable than the vague and unsubstantiated risks posed by carbon emissions.

The most effective and efficient pathway out of Paris is to withdraw from the United Nations Framework Convention on Climate Change altogether.