Entrepreneurs Are Better Than Government, Even When Building Infrastructure 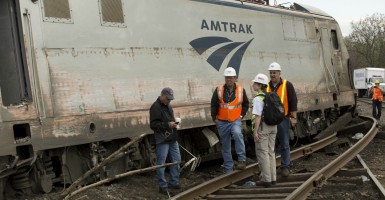 Some in Washington appear to be convinced that government spending can fix all the world’s ills, from underemployment to human error. Last month’s fatal Amtrak wreck in Philadelphia sparked the usual knee-jerk demands for more federal spending to prevent future tragedies. A spate of articles lamented the allegedly insufficient public “investment in transportation infrastructure” — covering everything from rails to roads and bridges.

Excessive speed rather than inadequate investment seems to lie at the heart of the Amtrak tragedy. Yet spenders gotta spend. Writing in The Economist, Simon Baptist asked his readers for ideas on how to finance the rebuilding of America’s infrastructure.

Here’s one: Let entrepreneurs do it.

American entrepreneurs built the greatest and freest country the world has ever seen. Unfortunately, the conditions that allowed the entrepreneurial spirit to flourish have deteriorated in recent years, according to the annual Wall Street Journal/Heritage Foundation Index of Economic Freedom. The main culprits? Too much government spending, too many taxes and a growing sense that the rule of law in our country is unraveling.

If we rely solely on government to maintain and upgrade America’s infrastructure, all of those problems will only grow worse.

For starters, look at Amtrak. Coastal elites in the Northeast Corridor and Southern California help its operations there turn a profit. But elsewhere, it hemorrhages red ink. The Amtrak inspector general reports that, even with $2.25 sodas and $6.75 cheeseburgers, its food and beverage service alone loses $87 million annually. Meanwhile, the average Amtrak employee makes upward of $100,000 a year in pay and benefits. The federal taxpayer winds up subsidizing this loss leader to the tune of about $1.4 billion annually.

Meanwhile, the U.S. freight-rail system — deregulated and modernized by private investment — is booming. Why can’t we do the same with Amtrak passenger service?

For numerous reasons, most Americans prefer driving to taking Amtrak. Highways account for about 87 percent of all passenger miles traveled, while Amtrak’s share is some 0.14 percent. Clearly, Washington’s infrastructure spending does not match taxpayers’ infrastructure preferences.

Much better to reduce the federal government’s role in transportation spending and give states more say in how best to invest in the infrastructure that their citizens deem most necessary.

Here again, entrepreneurs and private investors can make a big difference. States can turn to creative infrastructure financing options, such as raising private equity capital through P3s (public-private partnerships). In recent years, several states have raised hundreds of millions of dollars through P3s for transportation projects such as the Capital Beltway HOT lane project near D.C. While not a panacea, P3s are emblematic of the sorts of innovative approaches that can generate additional funds needed for future road and bridge building.

Another way to empower state-level infrastructure spending is to lower the federal fuel tax. End the costly and wasteful federal subsidies for streetcars, bicycle paths, walking trails and landscaping, and you could cut the federal gas tax from 18.4 cents per gallon to 3.7 cents (all that’s needed to maintain the Interstate system). That would ease the federal burden on motorists and leave states free to raise their own transportation revenue — be it through fuel taxes or other arrangements.

Inefficient and inferior-quality government-built infrastructure afflicts nontransportation fields as well. Take housing, for example. Public housing policies have been fiascoes for decades, often creating neighborhoods that are squalid and crime-ridden. And distortionary federal rules providing taxpayer-subsidized, morally hazardous mortgages were some of the key causes of the 2008 financial meltdown.

President Obama infamously claimed that the American entrepreneur “didn’t build that.” Yet generations of entrepreneurs have built job-creating companies, neighborhoods of affordable and comfortable homes, national energy networks of pipelines and electricity grids, and countless other privately funded, for-profit projects that have created wealth and served the public well.

Why not give tomorrow’s entrepreneurs a chance to boast proudly to our next chief executive: “Yes, Mr. President, we did rebuild America’s infrastructure!”

This story was originally posted on The Washington Times