How Goldwater and Reagan Responded to Defeat 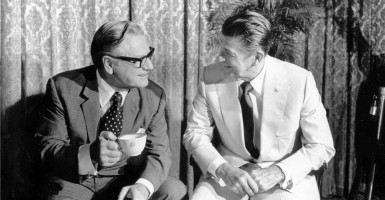 In the wake of the Supreme Court’s devastating opinions on same-sex marriage and Obamacare, some conservatives are asking themselves: Has America reached the point when we have become like ancient Rome in its final days, all bread and circuses, that we cannot make our way back to the ideas on which we were founded?

Do the actual words of the Constitution matter anymore? Should we give up the fight for limited, constitutional government and simply accept that the left has won?

Of course not! Conservatives have never been quitters as two of our greatest heroes—Barry Goldwater and Ronald Reagan—demonstrated when conservatism was at its lowest ebb in 1964 and again in 1976.

In a remarkable demonstration of political courage, Goldwater decided in 1964 to run for the Republican nomination for president knowing that he could not win.

Every poll, including his own, showed him receiving less than 30 percent of the vote in a race against Lyndon Johnson.

Americans were still grieving over President John Kennedy’s tragic death and looked to LBJ to carry out the martyred president’s program. What politician would grasp the nettle of almost certain defeat?

As I recount in my reissued biography, “Goldwater: The Man Who Made a Revolution,” Barry Goldwater declared his candidacy despite the impossible odds.

Driven by duty and honor, he raised the conservative standard and offered the American people a conservative choice, not a liberal echo.

He hoped that by running he could rally conservatives to take over the Republican Party and help get the country back on the right course.

Although he won only 38.5 percent of the popular vote and carried just six states, Goldwater still received 27 million votes—a firm foundation on which to build a national political movement.

Conservatives could have given up after Goldwater’s landslide defeat, but they resolved to fight on for the ideas he had articulated during his campaign, such as welfare reform, an end to farm subsidies, privatization, a flat tax, and victory over communism.

Considered extreme at the time, these ideas entered the mainstream of politics through the unrelenting efforts of conservative leaders like Ronald Reagan and institutions like The Heritage Foundation.

In 1976, Reagan followed Goldwater’s example of political courage and commitment to principle, by challenging and nearly defeating the incumbent President Gerald Ford for the Republican nomination.

Those who had worked so hard for Reagan’s nomination were in deep despair. Not so the candidate who took the long view.

The ever optimistic Reagan consoled his supporters: “Yes, we lost, but the cause—the cause goes on.” And he quoted lines from an old Scottish ballad, “I’ll lay me down and bleed awhile; though I am wounded, I am not slain. I shall rise and fight again.”

Reagan went on to serve two terms as governor of our most populous state and two terms as our president, capping his presidency by ending the Cold War, as Margaret Thatcher put it, “without firing a shot.”

I am certain that present-day conservatives will rise and fight again, inspired by the example of Barry Goldwater and Ronald Reagan, to defend the precious idea of ordered liberty that lies at the heart of our Republic.