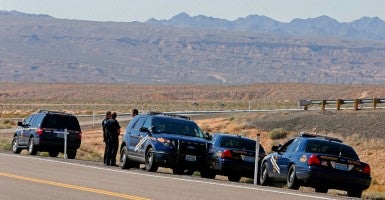 A federal judge in Nevada has ordered the government to return $167,000 that was seized from a man driving his motorhome on a highway two years ago. The man, Straughn Gorman, was traveling to visit his girlfriend. He was never charged with a crime.

The seizure originally occurred in January 2013, when Gorman was driving his motorhome from Delaware to visit his girlfriend in Sacramento, Calif.

Police stopped Gorman not once, but twice, within 50 minutes while he drove west on Interstate 80, according to documents filed with the U.S. District Court for the District of Nevada.

Less than an hour later, Gorman was stopped again by an Elko County Sheriff’s Office deputy, who the highway patrol trooper had arranged to pull Gorman over once more, court documents show. The deputy had a drug-sniffing dog with him, and a search of the motorhome was conducted.

In the two-minute video originally posted by the Las Vegas Review-Journal, the officer searched the vehicle, where he found $167,000 in cash stored in different places throughout the motorhome.

The officer told Gorman that the cash, his computer, cellphone and vehicle would all be seized under civil asset forfeiture laws.

Though the Elk County Sheriff’s deputy said the dog detected drugs in the motorhome, none were found, and Gorman was never charged with a crime.

Instead, he became another victim of civil asset forfeiture, a procedure that gives local, state and federal law enforcement the power to seize money and property if it’s suspected of being related to a crime.

Gorman fought back against the government’s seizure of his $167,000, and last week, more than two years after his money was seized, a judge ordered local and state law enforcement to return his money.

According to court documents, Larry Hicks, a U.S. District Judge for the District of Nevada, criticized the government for withholding information related to Gorman’s second traffic stop.

“No matter how this can be viewed, the two stops were for minor violations and they both were extended beyond the legitimate purposes for such traffic stops,” Hicks wrote in his opinion.

“In particular, the government has a duty of candor and fair disclosure to the court,” he continued. “The court expects and relies upon the United States Attorney’s office to be candid and forthcoming with material information uniquely held only in possession of the government and clearly relevant to central issues before the court. That did not occur here.”

Hicks also notified Gorman that under the 2000 Civil Asset Forfeiture Reform Act, he is entitled to be reimbursed for his lawyer’s fees and litigation costs. His lawyers are now working to ensure those fees are paid by the government.

The tool started as a way to curb drug trafficking and money laundering, but a number of high profile cases have emerged featuring innocent people who have had money and property seized. In most of the cases, including Gorman’s, the property owners are never charged with a crime.

Policy experts instead point to the profit incentive forfeiture provides law enforcement with as evidence that the practice has been abused.

>>> Commentary: What Can Be Done to Help End Civil Asset Forfeiture Abuse