Without a Script, Chris Christie Plunges Into 2016 Presidential Race 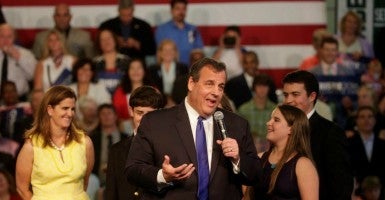 Forsaking notes and teleprompter to highlight a give-it-to-you-straight style, New Jersey Gov. Chris Christie this morning became the 14th Republican candidate in the 2016 race for president.

“I am ready to work with you … to restore the American dream for our children,” @GovChristie says.

Christie, 52, sought to walk the talk of his campaign slogan, “Telling It Like It Is,” in declaring his long-expected entry into the race in the gym of Livingston High School, where he graduated in 1980 after three years as class president.

“America is tired of weakness and handwringing in the Oval Office,” Christie said, microphone in hand and pacing the stage in a tight circle. “I mean what I say and I say what I mean, and that’s what America needs right now.”

Near the end of his 27 minutes of remarks, he said:

I don’t seek the presidency for any other reason than I believe in my heart that I am ready to work with you to restore America to its rightful place in the world and to restore the American dream for our children.

Standing just behind the governor were his wife of almost 30 years, Mary Pat (“a politician just as good as me”), and their four children.

“Everything started here for me,” Christie said. “I had to come home, and Livingston is home for me.”

Christie, wearing a gray suit and purple tie, outlined how his parents moved to Livingston as the first in their families to leave Newark. His father had to walk away from admission to Columbia University after his own father died, and instead went to work in an ice cream plant. His father eventually took night classes at Rutgers for six years to earn an accounting degree—and become the first college graduate of either family.

Christie said his mother, six months pregnant with him at the time, would instill a belief that he, his brother and their sister could do anything if they worked hard enough. The greatness of America, Christie said, is seen in the fact that he could go on to become governor.

“This country has to work together again, not against each other,” Christie said, ticking off accomplishments as governor that he said included refusing to raise taxes while balancing six state budgets and making “hard decisions” to improve education while reforming teacher tenure, pensions and health benefits.

He did not mention New Jersey’s skyrocketing debt, driven by unfunded state employee pensions. The state’s unemployment rate continues to top 6 percent, making it one of the highest in the nation as jobs lost in the recession are slow to come back. Democrats control the state legislature.

The media get it wrong when they describe Americans as “angry,” Christie said, when Americans actually are “filled with anxiety” because they have “bickering leaders” and “both parties have failed our country.”

“That anxiety,” he added, “can be swept away by strong leadership and decisiveness.”

In five broad strokes, Christie pledged his campaign and White House would:

In recent months, Christie outlined a plan to reform Social Security and other federal entitlements and pledged to scrap Common Core national education standards in his state in favor of “higher, New Jersey-based standards” to be developed by year’s end.  A Roman Catholic, he has underlined that his pro-life stance includes helping those addicted to drugs to get back on their feet.

Christie, who released a video in the run-up to his announcement, was elected governor in 2009 and re-elected in 2013. He previously served seven years as U.S. attorney for New Jersey, a post to which he was appointed by President George W. Bush.

A crowd of protesters estimated at more than 100 gathered outside the high school to slam the governor on issues ranging from teachers’ pensions to unrepaired damage to homes after Hurricane Sandy.

Aides believe the “town hall” format, usually featuring Christie’s often-blunt answers to questions from the audience, has served him well as governor.

Christie, whose campaign website recently went live, was scheduled to head straight to Sandown, N.H., for a town hall-style event in the evening. New Hampshire is the site of the nation’s first primary next February, and events in Ashland, Rochester, and Portsmouth also are on the governor’s schedule going into Independence Day.

C-SPAN’s video of Christie’s remarks may be found here.