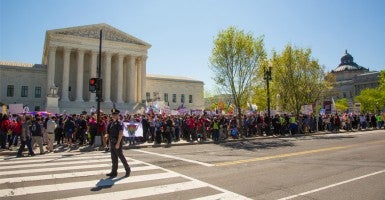 Following the Supreme Court’s decision to legalize gay marriage on Friday, a Pennsylvania newspaper will no longer publish views on traditional marriage.

According to a story from its editorial board, “PennLive/The Patriot-News will very strictly limit op-eds and letters to the editor in opposition to same-sex marriage.”

However, for a “limited time” only, the newspaper will accept letters and op-eds that are “critical of the high court’s decision and its legal merits.”

The editorial was originally published at 9:58 a.m. Friday to coincide with the Supreme Court’s ruling that bans on same-sex marriage are unconstitutional.

The post was amended at 12:58 p.m. in order to explain PennLive’s new policy for accepting letters and op-eds on same-sex marriage.

“These unions are now the law of the land,” the newspaper editors wrote. “And we would not entertain such criticisms that these unions are morally wrong or unnatural any more than we would entertain letters or op-eds that are racist, anti-Semitic or sexist.”

This news comes from a story entitled, “The Supremes got it right—It’s no longer ‘gay marriage.’ It’s ‘marriage.’ And we’re better for it.”

Read tweets below that illustrate how Americans are responding to the newspaper’s decision.

Also, in light of yesterday's Burwell ruling, we will shoot people on sight if they criticize Obamacare. pic.twitter.com/k7zYjSDaGR

Here is a sign of the closing of the American mind — closing fast. http://t.co/7ywdtXI1G7