Lawmakers Should Act to Keep Hamilton on the $10 Bill 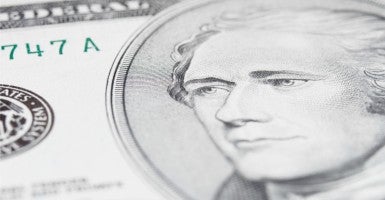 Last week the Department of the Treasury announced a plan to remove Alexander Hamilton’s portrait from the $10 bill and replace it with a portrait of “a woman.”

While there is certainly nothing wrong with wanting to include a woman on the nation’s currency, this particular move is a bad idea, for several reasons.

In the first place, the plan as it has been announced diminishes the role of merit in selecting who is to be on the country’s money. Placing a person’s portrait on the currency is a way of honoring that person. Money is the government product that all Americans handle on a daily basis, and by putting images of great Americans on the currency we seek to remind ourselves of their greatness and of our debt to them.

This is why, paradoxically, we place images of the greatest Americans on the smallest units of currency: George Washington is on the $1 bill, and Abraham Lincoln is on the $5 bill. The smaller denominations are issued in greater numbers and handled more frequently, so it is a greater honor to have one’s image placed on them.

Public honors should be distributed according to merit. Merit, however, is clearly not the reason some wish to remove Hamilton from the $10 bill. The Treasury has not identified some American more meritorious than Hamilton. It has simply expressed the desire to feature “a woman” on the bill.

The Treasury, it would seem, is not seeking to honor some specific person whose attainments could reasonably be presented as comparable to Hamilton’s, but is merely playing at identity politics.

This is not to say, of course, that there is no American woman who could deserve to be on the nation’s currency. It is only to point out that the Treasury is debasing the honorable practice of placing portraits on the currency by making meritsa secondary consideration.

In the second place, Hamilton’s accomplishments are such that we should want to honor him by keeping him on the $10 bill. Leave aside the fact that Hamilton was the first secretary of the Treasury, and that it is therefore somewhat strange that today’s Treasury would want to displace him from his seat of honor.

Hamilton was not just the first secretary of the Treasury; he was the most important secretary of the Treasury and one of the most consequential American statesmen the country has produced. Hamilton, more than any other single man, devised the plans that rendered America’s revolutionary debt manageable, restored the nation’s credit and established the financial institutions that paved the way to our nation’s remarkable prosperity and power. All of this on top of organizing and being the lead author of the “Federalist Papers.”

Besides, Hamilton’s personal story is also such that we should wish to honor him. He came to America as an orphan, entered the army when the revolution broke out, and quickly rose to a position of prominent responsibility on the staff of George Washington. During his service in the army Hamilton studied public finance in his spare time, preparing himself to serve the country politically after its independence had been won.

Hamilton was an immigrant who became an American patriot and who worked to improve himself so that he could make his patriotism fruitful for his adopted country.

Finally, since we live in a democracy, public honors should be distributed by the people’s representatives, and not by unelected bureaucrats. Except in the case of the $1 bill, the redesign of which is prohibited by law, Congress has delegated to the Treasury the power to determine whose portrait is placed on the nation’s currency.

It would be proper for Congress to reclaim this authority for itself and to use it to protect Hamilton’s well deserved place of honor on one of our most-used currency notes.