When Did Obamacare Become Pro-Growth? 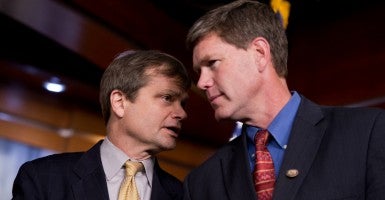 It was shocking to read Kimberley Strassel describe the 28 House Democrats voting in favor of fast-track trade authority as “pro-growth” in her latest Wall Street Journal “Potomac Watch” column. One single vote—a vote on a congressional process—is not enough to overcome a lifetime of economically disastrous votes.

Seventeen of those 28 Democrats were in Congress during the dark days of 2009 and 2010. Not a single one was willing to vote against Obamacare or President Obama’s Keynesian stimulus scheme. Only one opposed the House-passed cap-and-trade bill and just  two were willing to oppose Dodd-Frank.

The most destructive economic policies advanced by the Obama administration were warmly embraced by these so-called “pro-growth” Democrats. Are we to believe these party loyalists have turned the corner?  Or that Obama himself is now pro-growth? Of course not.

These lawmakers have nothing to brag about and we do the American people no favors when we paint them as pro-growth centrists.