Law Enforcement Seizes $11,000 From 24-Year-Old at Airport Without Charging Him With a Crime 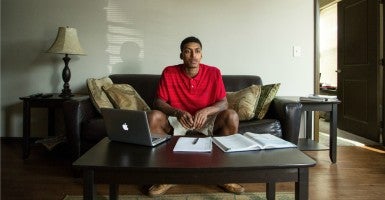 After spending several weeks with family in Cincinnati, Ohio, Clarke arrived at the Cincinnati/Northern Kentucky International Airport in Hebron, Ky., for a flight back to Orlando, Fla., where his mother lived and where he would be taking classes at the University of Central Florida.

With $11,000 in his pocket—the culmination of five years worth of savings from various jobs, financial aid, gifts from family members and benefits from his mother, a disabled veteran—Clarke checked his bag and headed to the gate to await the departure of his flight.

He would eventually return home, but the cash Clarke had in his pocket didn’t make it.

Instead, the weight of the federal government came down on the 24-year-old, and his $11,000 was seized by federal and state law enforcement before he ever boarded the plane.

“I’m not a drug dealer. I’ve never been,” Clarke said. “I didn’t have any plans on doing anything illegal. I was just trying to get home.”

Clarke brought the money with him to Cincinnati, Ohio, he said, because his mother was moving apartments, and he didn’t want the moving company to find his money. Additionally, because his bank had few branches, he felt safer knowing his money was near.

After Clarke checked his bag and headed to the gate, a ticketing agent with U.S. Airways—unbeknownst to the young man—placed a call to agents with the Drug Enforcement Administration and the Cincinnati/Northern Kentucky Airport Police Department. The ticketing agent told the officers that Clarke’s luggage smelled like marijuana, according to an affidavit filed by William Conrad, a Cincinnati-based officer with a DEA task force, with the U.S. District Court for the Eastern District of Kentucky.

Conrad and Detective Christopher Boyd approached Clarke when he was waiting at the gate and asked if had drugs or money on him. According to Conrad’s affidavit, Clarke was “free to walk away at any time.”

Clarke told the agents he had $11,000 in his pocket and agreed to let the officers search both him and his carry-on bag. The officers didn’t find any drugs. However, Clarke admitted that he had smoked marijuana on his way to the airport.

Clarke received his phone and tablet two months later. But, more than a year later, he’s fighting to have his cash returned.

“I was being treated like a criminal, and I didn’t commit a crime,” he said. “It was very frustrating,” said Charles Clarke.

>>> How Did Police Seizing Citizens’ Property Ever Become Legal? Here’s the History of Federal Forfeiture

“I was being treated like a criminal, and I didn’t commit a crime,” he said. “It was very frustrating.”

According to court documents, Conrad said the money was seized “based on probable cause that it was proceeds of drug trafficking or was intended to be used in an illegal transaction.”

“Mitigating factors” included the purchase of a one-way ticket, inability to provide documentation noting where the money came from, a positive hit by a drug dog and the strong smell of marijuana on his checked luggage.

When the officers attempted to take Clarke’s money, Conrad alleged the 24-year-old “became irate” and grabbed Boyd by the wrist.

“A short struggle ensued and Clarke was eventually arrested and charged with assault on a police officer, resisting arrest, and disorderly conduct,” Conrad said in court documents.

However, the charges against him were dropped, and Clarke was never charged with a crime related to the alleged drug trafficking.

“I was nervous,” Clarke said of his encounter with the officers. “I didn’t want them to take my life savings. I worked hard to save this money.”

The United States attorney for the Eastern District of Kentucky did not return The Daily Signal’s request for comment.

The Drug Enforcement Administration and Cincinnati/Northern Kentucky Airport Police Department seized Clarke’s cash through civil asset forfeiture, which gives law enforcement the power to take money or property if it’s suspected of being related to a crime.

In many cases, though, the property owner is never charged with a crime, and those who fight to have their cash and property returned are forced to prove that their belongings are innocent. The practice, policy experts argue, flips the presumption of innocence—innocent until proven guilty—on its head.

In Clarke’s case, the money was seized under the Department of Justice’s Equitable Sharing Program, which entitles local and state law enforcement agencies to up to 80 percent of the proceeds from seized cash and property.

From 2008 to 2013, according to the Arlington, Va.,-based Institute for Justice, $6.8 billion in cash and property has been seized through the Equitable Sharing Program.

Though just two agencies—the Drug Enforcement Administration and Cincinnati/Northern Kentucky Airport Police—were involved in the seizure of Clarke’s $11,000, 11 agencies across Kentucky and Ohio are arguing they’re entitled to a cut of the cash.

That’s according to Renee Flaherty, one of Clarke’s lawyers at the Institute for Justice, who spoke with The Daily Signal.

The airport police department is requesting 40 percent of the money and the Cincinnati Police Department wants just 6 percent, with the remaining 11 agencies requesting 3 percent of Clarke’s $11,000 each.

“Every little bit adds up,” Flaherty said regarding the money the agencies are requesting. “This just goes to show the perverse financial incentive that underlies civil forfeiture. If the law allows agencies to be able to keep the money they seized themselves, it’s going to incentivize law enforcement to seize as much property as possible.”

In recent years, local and state law enforcement agencies have been using civil asset forfeiture to pad their budgets, and the proceeds from money and property seized has been used to purchase things like a Dodge Viper and pay for officers’ overtime. Additionally, seizures at airports, specifically the Cincinnati/Northern Kentucky International Airport, have also skyrocketed.

According to Institute for Justice, the airport conducted just a “couple dozen” seizures per year during the late 1990s. However, by 2013, the airport participated in 100 seizures, with proceeds totaling more than $2 million. After Clarke finally made it back to Florida—without his $11,000—he was forced to move back in with his mother, as he planned to use the money to pay for his living and school expenses. Clarke also took out additional student loans to help get himself settled at the University of Central Florida.

“It was a struggle for me. It was my life savings. I didn’t have anything to my name after they took it. It’s really frustrating and hard, being that I had to rely on my family,” he said. “Other people had priorities. It was almost like a waiting game for me. People helped me out when they could and when they couldn’t, I was pretty much in a bind. It was really hard and frustrating, saddening, and so many emotions running through me.”

Though the Institute for Justice has been successful in fighting forfeitures in court, Flaherty said the government employs a preponderance of evidence as the standard of proof in forfeiture cases—a lower standard than what’s used in criminal cases.

“The deck is really stacked against property owners, and the law is not really in our favor,” she said. “But what we’re trying to do is fight back and say, ‘No, the odor of marijuana is not enough to take someone’s life savings when there’s absolutely no evidence of a crime occurring.’”

Law enforcement argued Clarke failed to provide sufficient documentation for where his $11,000 came from, but Flaherty said she’s confident they have documentation from his three jobs and mother’s benefits to prove exactly where the money came from.

As is the case in many forfeitures, the government offered Clarke a settlement. However, neither he nor Flaherty could discuss the details of the offer. Oftentimes, though, the federal government will return just 50 percent of the money if the victim agrees to the settlement.

Clarke, though, has no plans to accept any deal from the government.

“I want everybody to know that carrying cash is not a crime,” he said. “The law is not right. Innocent people are being treated like criminals without even being convicted of anything.”