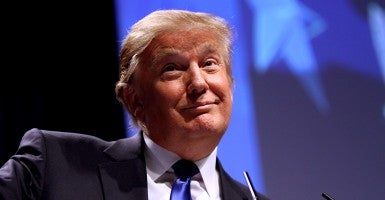 Donald Trump announced he’ll be running for president in 2016. Trump joins 11 other Republicans who have already announced their candidacy. Here are some facts about the latest presidential candidate:

Donald Trump is the only presidential candidate with his own board game.

1) Trump almost filed for bankruptcy in 1990, due to massive personal and business debts. A significant amount of debt was garnered from financing the Taj Mahal, one of Trump’s casinos acquired in 1988, through high-interest junk bonds. However, he ceded 50 percent ownership of the casino to the original bondholders, who lowered Trump’s interest rates and extended the loan so Trump had more time to pay off the debt. Today, Trump owns more than 100 companies and his net worth is approximately $4 billion.

2) Trump World Tower, a residential skyscraper in Manhattan, has 72 completed floors (but lists 90 stories in the elevator panel). Before 21st Century Tower in Dubai and Tower Place 3 in Seoul were built, Trump World Tower was the largest residential building in the world.

3) Trump was the original owner of New Jersey Generals of the United States Football League. Trump sold the franchise to J. Walter Duncan in 1983 so he would be free to complete various construction projects.

4) Trump hosted his own reality TV show, “The Apprentice,” starting in 2004 on NBC. The purpose of the show is to eliminate contestants in order to find a head for one of Trump’s companies. Trump was paid $375,000 per episode of the show.

5) Trump doesn’t drink alcohol. His older brother struggled with alcohol throughout his life. “I learned a lot from my brother, Fred,” Trump said in an interview with Steve Forbes. “He set an example. It wasn’t, maybe, the example that people would think, but it really was, in its own way, an example. That here was this fantastic guy, who got caught up in the alcohol, and he ultimately died from alcoholism.” Donald Trump holds up a statement of his net worth after declaring his candidacy for president. (Photo: Anthony Behar/ Sipa USA/Newscom)

6) Trump’s parents sent him to the New York Military Academy when he was 13 because he was an energetic child. They thought the institution would teach him some discipline. He graduated from the military academy in 1964 before continuing his education at Fordham University and eventually, the University of Pennsylvania.

7) In 2007, Trump received his own Hollywood Walk of Fame star for his role as producer of “The Apprentice.” His star was the 2,327th added to the Walk of Fame.

9) Trump is the only presidential candidate with his own board game, “Trump the Game.” The game was released in 1988 and requires players to invest in real estate properties, while simultaneously attempt to bankrupt competitors.