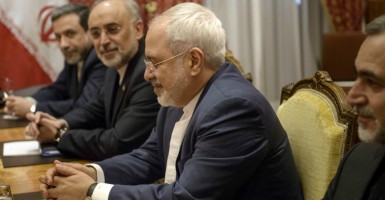 Countries monitoring the Iranian nuclear program are failing to report Iran for violating sanctions imposed against it, according to a United Nations report.

The report also suggests that violations of the United Nations Security Council’s sanctions by the Iranian regime are going unreported because it would reflect poorly on Tehran as they negotiate a nuclear deal with the U.S. and other world powers.

According to Bloomberg, the United Nations report states:

“The current situation with reporting could reflect a general reduction of procurement activities by the Iranian side or a political decision by some member states to refrain from reporting to avoid a possible negative impact on ongoing negotiations [between Iran and the P5 +1].”

The P5+1 negotiating group is comprised of the U.S., United Kingdom, France, Russia, China and Germany. It is assisted by the European Union.

James Phillips, an expert on the Middle East at The Heritage Foundation, said that “the report raises questions about whether the Obama administration and European allies have looked the other way on some sanctions violations.”

“The United Nations report underscores the danger that the Obama administration and other governments may purposely ignore Iranian cheating on the impending nuclear agreement, just as they already apparently are ignoring Iranian violations of United Nations sanctions resolutions.”

The Security Council imposed the sanctions against Iran to inhibit Tehran’s ability to develop nuclear weapons, despite claims by Tehran that its enrichment program is merely intended for peaceful purposes.

The report comes just weeks before the June 30 deadline for a nuclear deal with Iran.