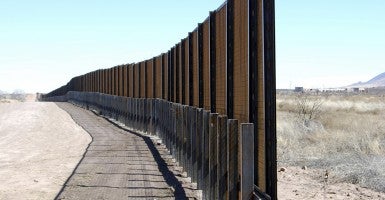 The Center for Immigration Studies recently released a report stating that arrests of non-citizens who have been convicted of a crime decreased by 32 percent since this time last year.

However, the Center for Immigration Studies says this does not indicate there are fewer criminally convicted illegal immigrants in the United States, but rather, the government is arresting fewer of such people overall.

In fact, U.S. Immigration and Customs Enforcement (ICE) identified 168,000 at-large convicted criminal aliens, but only arrested 11,983 according to April 2015 statistics compiled by the Center for Immigration Studies.

Additionally, the report shows that approximately 904,000 illegal immigrants have not left the country, despite orders to be removed. Of these immigrants, 167,527 are convicted criminals.

“The long-term ramifications are continued crime inflicted upon U.S citizens,” said Marguerite Telford, director of communications at the Center for Immigration Studies. “So the administration’s catch and release policy means these criminal aliens are free to commit additional crimes.”

Other reports confirm fewer illegal immigrants are being detained.

According to a report released by the Government Accountability Office in November 2014, ICE’s Alternatives to Detention (ATD) program grew from 32,065 to 40,864 from fiscal year 2011 to 2013. The ATD program began in 2004 as a cost-saving alternative to detaining illegal immigrants.

David Inserra, an expert on homeland security at The Heritage Foundation, says it’s not a bad thing that more immigrants are entering the Alternatives to Detention Program.

“Robust forms of ATD, such a GPS tracking anklets, are cost-effective ways to ensure that illegal immigrants show up at court hearings,” Inserra said. “With that being said, some individuals need to be detained and criminal aliens fit that bill. While the use of proven and strong ATD should expand, the administration should also be filling its detention beds, as is required by law, rather than allowing known criminal aliens to be released.”

Of these, 4,088 convictions were related to immigration offenses. Only 8 percent of criminal releases in 2014 were because native countries would not accept the immigrants back.