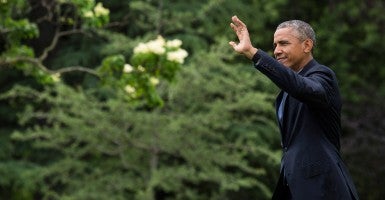 The Obama White House has embraced digital communication like none before it.

According to The Washington Post, the White House Office of Public Engagement has no less than 14 employees whose job it is to push the President’s message out on new media and social Web sites.

After all, this is a president who was elected to office on the strength of Internet-based fundraising and the enthusiasm of Generation Xers.

Digital communication and interviews with alternative news websites come easily to this president, whose ready smile and sometimes self-deprecating sense of humor plays well with younger audiences and who is entirely at ease on offbeat talk shows like Between Two Ferns.

According to the Post, White House official Paulette Aniskoff, head of the White House Office of Public Engagement, was recently dispatched to Hollywood for a strategy session on how the Obama administration can work with YouTube and other digital outlets to “promote some of the administration’s key policies.”

The meeting, which lasted two hours, according to the Post, “in many ways exemplifies how central digital media and audience engagement have become to the functioning of the Obama White House.” It exemplifies more than that: It also reveals Hollywood itself as a part of the White House propaganda machinery, a powerful political megaphone.

But there is more to this story than the hipness of the Obama presidency and the embrace of likeminded Hollywood producers. For one thing, while the array of digital examples and numbers seems impressive, in the aggregate Obama’s digital followers are still a small portion of Americans compared to the nation as a whole.

If you add up all their followers on Twitter, Facebook, Instagram, and Google+, the president, the first lady, and the White House reach an audience of 20 million Americans. That leaves the vast majority of the 300 million U.S. citizens to whom and for whom the president is also accountable and with whom he needs to communicate.

Only glancingly does the Post touch on a darker side of this story: While the Obama White House is creating an appearance of openness and sharing through its sophisticated use of social media, it is at the same time able to exercise more control over its messaging.

Traditional media have all been shut out of reporting on the Obama White House, and this has been a cause of ire not just for media associated with the right, but across the board.

From photo journalists complaining of a lack of access to take pictures of the President and his family to the Administration’s prosecutions of government sources suspected of leaking to even seizures of journalists’ records and criminal investigations of reporters, this Administration has sought to control any potential contact with reporters. All this despite its vaunted emphasis on “transparency.”

Now, many presidents have looked for ways to address the American people directly, hoping to evade the gatekeepers of the national media. But the Obama administration’s two-pronged approach is something new, reaching out through digital media and Hollywood while at the same time closing the spigot on traditional and sometimes inconvenient media coverage.

It doesn’t have to be this way. A more transparent and less obsessively controlling occupant of the White House could (and should) take a different course.