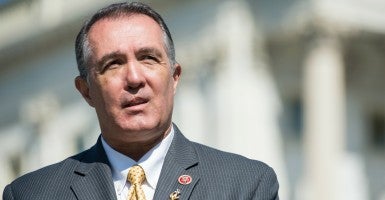 The bill, passed by a 242-to-184 vote, would prohibit abortion after 20 weeks—approximately halfway through a pregnancy—with exceptions for victims of rape or incest, or if the life of the mother is at risk.

The bill removed a provision in the original version that would have required women who became pregnant through rape to report their assault to law enforcement authorities to be eligible for an abortion after 20 weeks of pregnancy.

Under the new bill, such women would have to receive counseling or medical treatment at least 48 hours before having an abortion.

House Republican leaders dropped the original bill in January after female lawmakers in their party pushed back against some of its provisions.

The Pain-Capable Unborn Child Protection Act was passed on the two-year anniversary of the conviction of Philadelphia abortionist Kermit Gosnell, who was found guilty of murdering three infants born alive and for the involuntary manslaughter of a patient named Karnamaya Mongar.

In a speech on the House floor, Rep. Diane Black, R-Tenn., said that the occasion is an appropriate time to pass the bill.

“Americans were rightfully outraged when told of his crimes, but the truth is that innocent, unborn children routinely suffer the same fate as Gosnell’s victims through “normal” late-term abortions and the government does not bat an eye,” said Black. “The only difference between these casualties and the loss of life that resulted in Gosnell’s murder conviction is location.”

Senate Democrats are expected to block the legislation. The Obama administration also opposes the bill.

“It’s disgraceful that House Republicans would be considering a party-line vote on legislation that would put additional burdens on survivors of rape and sexual assault,” White House press secretary Josh Earnest told reporters on Wednesday before the vote.

Here’s what some members of Congress had to say about the legislation on Twitter:

We must protect the unborn. My very personal speech in support of “Pain Capable Unborn Child Protection Act. http://t.co/NM1KvGdzY4

In our society, we have the room, the resources, and the love for every child—even the smallest and most fragile. http://t.co/O9lzvgcnLz

Health care decisions should be made between a woman & her doctor, not politicians in Washington http://t.co/49FLQp4mTv #HR36 #StopTheBans — Rep. Dan Kildee (@RepDanKildee) May 13, 2015

Today I was proud to vote to protect the unborn. #PainCapableUnbornChildAct pic.twitter.com/yaWBxgV4rr

Women need to make their own personal health care decisions in consultation w/ their Dr. and spiritual advisor—not their Member of Congress.