Find Out How Your Senators Voted on the Keystone XL Pipeline 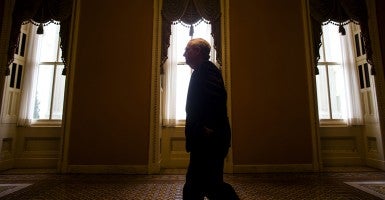 Senate Majority Leader Mitch McConnell, R-Ky. walks back to his office after speaking on the Senate floor about the Keystone XL pipeline vote on Jan. 29, 2015. (Photo: Jim Lo Scalzo/Newscom)

The Senate approved legislation on Thursday authorizing construction of the Keystone XL Pipeline, despite threats from the White House to veto it.

Supporters of the pipeline contend that it would create jobs and boost economic growth, and opponents worry about potential environmental ramifications.

“Constructing Keystone would pump billions into our economy,” Senate Majority Leader Mitch McConnell, R-Ky., said on the floor before the vote. “It would support thousands of good American jobs and as the president’s own State Department has indicated, it would do this with minimal environmental impact.”

President Obama reiterated his opposition to the project in his State of the Union address.

“Let’s set our sights higher than a single oil pipeline,” he said.

The proposed 1,179-mile pipeline would stretch from Canada to Nebraska where it would meet with existing pipelines, carrying oil to refineries along the Gulf Coast.

So how did your senators vote?

No Republicans voted to block the legislation, and nine Democrats voted to approve it.

See the full list of how each senator voted here. This article has been corrected to reflect that nine, not eight, Democrats voted to authorize the Keystone pipeline.