Hourly Compensation Has Grown By 69% Since 1972 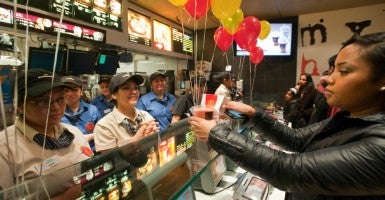 Have average wages for American workers grown since 1972? Absolutely—and only a reliance on measures with well-documented flaws can show otherwise. First, look around you: Americans at all income levels own more cars, have more air-conditioned homes, travel more, are more likely to attend college, and live longer than they did in the 1970s.

Reliable data sources show the same thing. Total hourly compensation, adjusted for inflation, has grown 69 percent since 1972. Wage growth is a little lower, because non-wage compensation (especially health insurance) grew rapidly from the 1940s until the early 1990s. Since 1975, the first year for which Quarterly Census of Employment and Wages data are available, average weekly wages have grown 42 percent.

In The Wall Street Journal’s “Real Time Economics” blog, reporter Jeffrey Sparshott shows that choosing a more accurate inflation measure reverses the false conclusion that wages peaked in 1972. But Sparshott—like many observers—is using a measure of wages that is not suited for historical comparisons.

The “average weekly earnings for production and non-supervisory workers” is drawn from the Current Employment Statistics survey, and is one of the first measures of wage growth available each month. Its promptness is valuable, but it is subject to survey error: Only 29 percent of surveyed establishments actually respond to the survey questions on earnings. And it is ill-suited to long-term comparisons, because the survey has evolved over time to cover a different group of workers than it did in the 1970s.

Economists Julien Champagne and André Kurmann note that the “CES sample underwent a substantial expansion from about 160,000 to 400,000 establishments between 1980 and 2006. This expansion is likely to have led to spurious changes in the CES average earnings measure.” In fact, the expansion was basically complete in 1993, when expansions and system improvements had reached all 50 states.

Into the 1980s, the CES survey excluded many small, service-sector establishments, which paid less than the large, old firms that the CES surveyed. As the survey was improved during the 1980s and 1990s to better match the QCEW data, those low-paying workers were included. By adding more low-wage workers to the survey, average earnings decreased.

By contrast, the QCEW (also known as the ES-202 program) is a census, not a sample. It draws its wage records from unemployment insurance records and is “a quarterly count of employment and wages reported by employers covering 98 percent of U.S. jobs.”

No measurement is perfect, and QCEW has some lacunae (business owners and the self-employed are excluded, for example). But it gives a far more accurate picture of 1980-2000 wage trends than the CES.