What to Make of ISIS Claim of Responsibility for Texas Shootings 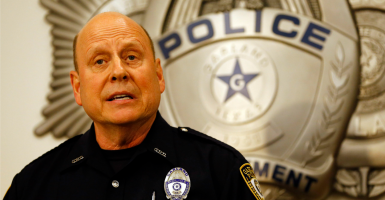 ISIS has claimed responsibility for a failed attack that occurred on Sunday in Garland, Texas.

At the “First Annual Muhammad Art Exhibit and Contest,” two individuals using rifles opened fire just before nightfall. The individuals pulled up to the entrance, which had received enhanced security measures due to the controversial event, and according to Garland Police reports, began shooting. One security guard was hit in the leg, but sustained no major injuries. Immediately, an officer responded, fatally shooting the two individuals.

According to press reports, law enforcement sources have identified the two men as Elton Simpson and Nadir Soofi. While unclear whether this event was a terrorist attack, Tuesday ISIS reportedly took credit in a broadcast from its official radio station referring to these men as the terrorist organization’s “brothers” and “Al Khilafa soldiers,” a term commonly used to describe ISIS’ own soldiers.

Not only did ISIS assert claim on what could be their first attack on U.S. soil, but it also asserted that more attacks in the nation were to follow. While law enforcement has not yet declared this shooting to be a terrorist attack, ISIS is trying to show that the terrorist organization can attack the United States at home.

In the coming days, it is expected the Federal Bureau of Investigation and Garland Police officials will determine the exact nature of the attack. If this were to be officially deemed an act of terrorism, it would be the 68th Islamic terror plot in the United States, following the 67th that occurred in late February.

For the time being, it is important to let the investigation run its course and allow federal and local agencies to determine the facts.

However, regardless of the designation of this case, the events illuminate the importance of ensuring that the nation’s state and local law enforcement agencies are thoroughly prepared to respond to terror plots and active shooter incidents.

In the event of these attacks, state and local law enforcement agencies are the first line of defense and usually the first responders to the scene. It is crucial to ensure that federal entities, like the Federal Bureau of Investigation, are more readily and regularly sharing information with state and local law enforcement, by treating these partners as critical actors in the fight against terrorism.

This shooting also shows that it is important to encourage and increase the training of state and local law enforcement for active shooter and terrorist events through the Federal Law Enforcement Training Center, which includes existing programs like the Active Shooter Threat Program.

The heroic example of the officer who stopped the two attackers in this case shows how well-trained local police are critical to stopping those who would hurt Americans.