The Truth About GOP Budgets: They Never Balance 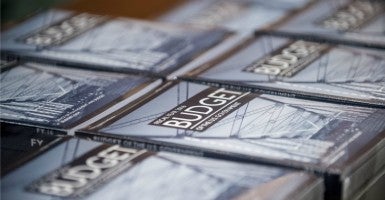 John Gray is a research fellow in federal fiscal affairs at the Roe Institute for Economic Studies at The Heritage Foundation.

In Washington, the conservative thing to do these days is to champion a balanced budget. Quite recently, in fact, Republicans have congratulated themselves for passing two budgets (one in each house of Congress) that, on their face, will achieve balance within 10 years. However, there is more to this story. When you remove the Enron-style accounting gimmicks, the truth is that these budgets never balance.

The trickery begins with the presence of nearly $2 trillion in bogus tax revenues (over 10 years). Both the Senate and House budgets start by assuming two fundamental policy measures: First, that nearly 70 minor tax cuts known as “tax extenders” are renewed, and second, that Obamacare is repealed, including the taxes that fund it. So far, so good. Unfortunately, this story quickly turns into one part fiction, one part hyperbole. In the mythical land of Washington budgeteers, the $2 trillion in tax revenue that would be lost under these assumptions magically reappears in the budget as the result of what is known as “revenue-neutral tax reform.”

The phrase “revenue-neutral tax reform” suggests that even with a complete overhaul of the tax code, the new tax system will be designed to raise the same levels of revenue as was projected under the current tax code. Without details on how this would be accomplished, Republicans should at most assume revenues to be no more than the long-term average, as a percentage of the economy (GDP). However, without any details on what the new tax system will look like, there are problems with the current budget’s revenue assumptions, particularly when they’re being used to balance the budget.

Let’s begin with the 70 temporary tax provisions, known as “tax extenders,” that Congress routinely renews. These provisions includes tax relief for small businesses, including Section 179 (small business expensing), the 50 percent bonus depreciation, an exemption from Subpart F (income for active finance), and, for many of us, the federal deduction of state and local sales taxes, among other provisions.

Although both budgets state that these tax provisions will, as usual, be extended, neither budget accounts for the $900 billion in static revenue loss (over 10 years) that would result. The budget writers argue that those lost revenues will be replenished with revenue-neutral tax reform, but that amounts to a confusing paradox.

On one hand, Republicans extol the importance of lowering taxes to help businesses and the economy. But on the other, their budgets depend on replenishing those tax cuts dollar-for-dollar with unspecified tax increases somewhere else. That’s either a confused economic theory or a blatant accounting gimmick.

When Obamacare was passed, it included huge amounts of new entitlement spending, to be funded by $1 trillion in new taxes. This didn’t sit well with the American public, and Republicans rode the “repeal Obamacare” slogan to majorities in Congress.

Delivering on their promise, both Republican budgets assume that Obamacare is repealed, at least partially. But they retain the $1 trillion in Obamacare taxes to balance the budget. That’s right: The Republican budgets scrap Obamacare’s spending, but keep its tax revenues to fund other government largess.

In an attempt to explain themselves, the budget authors will again claim that the revenues that are repealed along with Obamacare will be replenished, dollar-for-dollar, from tax reform. This is disingenuous. Was any Republican politician ever heard pitching: “We will repeal Obamacare, but will have to increase your taxes elsewhere to make up those revenue losses”? In effect, that’s what these budgets envision, though they do their best to keep quiet about it.

Obamacare taxes were enacted to pay for an expensive new entitlement program. When Obamacare is repealed, so too should be the revenues that pay for it. That $1 trillion in static revenues should not be included in the equation for revenue-neutral tax reform in the future. Period.

So why would Republican budgets assume $2 trillion in bogus revenue?

If the Republican budgets accounted fairly for the revenue lost through their policy assumptions, those budgets would never balance. On a static basis, the extension of the “tax extenders” takes the Senate and House budgets from balance to deficits of $81 billion and $64 billion, respectively, in the 10th year. These deficits more than double when the loss of tax revenue from Obamacare is factored in. To highlight the extent of this gimmick, the total projected deficits under these budgets increase by more than 124 percent after accounting for the loss of Obamacare and the loss of revenue through tax extenders. These budgets balance in name only.

While a balanced budget is not synonymous with small government, balancing the budgets with legitimate revenues that account honestly for the repeal of Obamacare and the extension of the tax extenders would have been a step in the right direction. As Republicans gather to work out a single, final version of the budget resolution, they have the chance to fix this unfortunate accounting gimmick. They should use it to ensure an honest budget—one that actually balances.