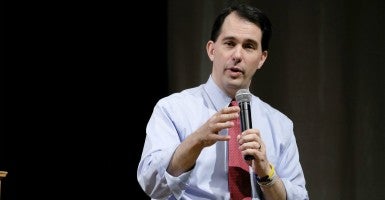 According to Fox Business, Walker, a Republican, initially proposed using $220 million in state bonds to finance part of the $500 million arena. The current and previous owners of the team have pledged a combined $250 million as part of the terms of the sale of the team, leaving the city and county to finance the remaining $30 million.

Republicans in the state legislature have said that they don’t want to finance more than $150 million of the project, and the city has said they will provide $18 million.

Fox Business also reports that the new stadium is part of “a larger $1 billion entertainment district” and that without a replacement for BMO Harris Bradley Center by 2017, “the NBA has said it will buy back the team and relocate it.”

According to the Milwaukee Journal Sentinel, in January Walker called his “Pay Their Way” proposal a “common-sense, fiscally conservative approach.”

“There’s absolute security for the taxpayers,” Walker said. “No new taxes, no drawing on existing revenues, no exposure to the future … My primary purpose for doing this is to protect an existing revenue stream and not add a new state liability for state government.”

Walker argued that should the Bucks leave Wisconsin, the responsibility of the current stadium’s maintenance falls to the state government, and as a “good steward” of the state’s resources “it is incumbent upon me to find a plan” to keep the Bucks in Milwaukee.

Terms of a deal have yet to be finalized.

The owners of the Bucks along with city and state officials have yet to come to terms on the specifics of a deal, but those involved expressed optimism that the deal is only a matter of time.

According to the Associated Press, Wisconsin Assembly Speaker Robin Vos said the meeting was “productive,” and that “any financing plan will remain a part of the state budget.”

Milwaukee Bucks president Peter Feigin told the AP the meeting was “positive and collaborative,” and Milwaukee Mayor Tom Barrett told them that “everyone in the meeting was operating in good faith.”

A spokesperson for the governor’s office did not immediately respond to The Daily Signal’s request for a comment.