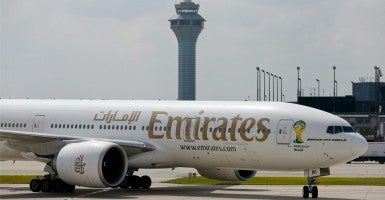 A trio of domestic airlines have joined forces to criticize competitors in the Persian Gulf that allegedly received billions in government subsidies.

And that’s not the only government benefit given to these foreign airlines.

The foreign airlines also benefited from billions in loans and loan guarantees from the Export-Import Bank over the years.

Called “open skies” agreements, the U.S. has negotiated more than 100 such accords since the early 1990s, which “eliminate government interference in the commercial decisions of air carriers,” according to the State Department.

Americans for Fair Skies is specifically focusing on the open skies agreements forged with the United Arab Emirates and Qatar, which govern state-run airlines Emirates Airline, Etihad Airways and Qatar Airways. Together, according to the coalition, the airlines have benefited from more than $42.3 billion in subsidies from their respective governments.

“In carrying out their dramatic and subsidized expansion, the UAE and Qatar have turned Open Skies on its head and violated both its letter and spirit,” Capt. Lee Moak, president of Americans for Fair Skies, wrote in a letter to supporters.

“Instead of letting the market determine prices, frequencies and routes, the Gulf airlines rely on their governments’ subsidies and largesse to compete unfairly, including their expansion of markets that would not otherwise be accessible through fair market-based competition, rendering U.S. airlines and their employees a mere regional jet service for the Gulf carriers’ massive global network,” Moak continued.

Moak and his organization argue the billions of dollars in subsidies the Persian Gulf airlines received allowed for their expansion into markets already occupied by U.S. airlines and their European partners, which creates an uneven playing field.

But, in addition to receiving subsidies from their own governments, two of the three airlines in question also benefited from close to $5 billion in financing from the Export-Import Bank.

According to the bank’s database, Emirates received close to $3.7 billion from Ex-Im since 2007.

The agency’s records do not include loans or loan guarantees awarded prior to 2007.

According to Ex-Im, the loans and loan guarantees awarded to Emirates and Etihad Airways were used for the purchase of Boeing aircraft.

Boeing is one of the bank’s largest beneficiaries.

Ex-Im provides taxpayer-backed loans and loan guarantees to foreign countries and companies for the purchase of U.S. exports. The bank’s charter expires June 30, and lawmakers are debating whether to reauthorize Ex-Im or allow its life to end.

Boeing has been lobbying Congress to extend Ex-Im’s charter, but Delta and its chief executive officer, Richard Anderson, object to the bank’s practices.

“In spite of our government’s stated goal to foster open markets free of state subsidized competition, U.S. airlines today face that very competition from our own government in the form of Ex-Im loan guarantees—subsidies that are both massive and unnecessary,” Anderson said while testifying before the House Financial Services Committee in June.

“When you get a cheaper loan, that’s savings you can reinvest somewhere else,” she said. “And sometimes, one of the ways these companies reinvest them is by creating [routes] that start in the U.S., being direct competitors to U.S. airlines.”

Ex-Im’s supporters argue the bank creates jobs in the U.S. and helps small businesses compete in the global market. However, de Rugy and others opposing the bank believe it furthers cronyism and corporate welfare.

“I don’t think that what people realize is that concretely, independently of the validity of these claims—whether jobs are really created—I don’t think that they realize that the real way Ex-Im operates is by giving such an edge to foreign companies that then end up competing on U.S. soil, or even in the global market,” she said. “It’s the always, never-ending unfairness of government redistribution.”

“I don’t think that they realize that the real way Ex-Im operates is by giving such an edge to foreign companies that then end up competing on U.S. soil, or even in the global market,” said @VerodeRugy.

“Similar to the domestic aviation landscape after deregulation, international services, traffic and economic activity have correspondingly grown since the United States began pursuing its open skies policy,” he said.

In response to Americans for Fair Skies’ allegations, the U.S. Departments of State, Commerce and Transportation announced Friday that the government would be soliciting feedback from stakeholders before deciding whether to take action.