Will We Surrender on Religious Freedom? 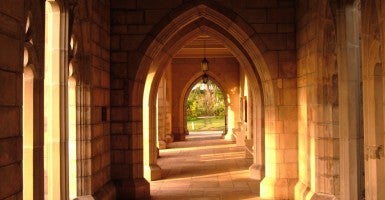 “They won’t go to Indiana, but they will go to Saudi Arabia.” That’s Carly Fiorina speaking about Apple CEO Tim Cook and his well-publicized opposition to Indiana’s religious freedom law.

Fiorina, a former CEO herself, was underscoring what she quite rightly views as hypocrisy. Here Cook is, excoriating Indiana lawmakers for protecting the freedom of business owners to act according to their consciences. Yet he has no qualms when it comes to doing business in countries where homosexuality is a crime punishable by death.

The double standard is truly remarkable. Maybe the oxygen content in room air gets thin at the top levels of some corporations. Something has to account for this myopia. Whatever the cause, it’s contributing to a level of near-hysteria about Indiana’s law (30 other states provide the same legal standard)—and making it nearly impossible for its true goals to be understood.

Supporters of Indiana’s Religious Freedom Restoration Act—or RFRA, which is modeled after the federal version President Bill Clinton signed two decades ago—aren’t trying to protect discrimination. That makes for a catchy sound bite for the other side, and they’re only too happy to throw it around in an effort to shut down debate before it can even occur. But they’re wrong.

Apple’s Tim Cook has no qualms when it comes to doing business in countries where homosexuality is a crime punishable by death.

What if, they’ll ask, a bed-and-breakfast owner believes homosexuality is sinful and doesn’t want to rent a room to a gay couple? Wouldn’t this law protect that?

No. Under RFRA, the couple could take the owner to court, and it would be up to the court to decide if the owners have a legitimate case. They may. They may not. But no one could simply refuse to rent a room to this couple and then that be the end of it.

The point is that those with legitimate religious objections—as determined in a court of law, where a burden of proof is required—would have the opportunity to make their case. They won’t be left with no choice but to violate their religious beliefs.

That’s what is at issue here: a balancing test. We don’t have a situation where the couple gets steamrolled with no recourse. But we also don’t have one where the owner gets steamrolled. In the spirit of fair-minded American jurisprudence, we do our level best to make sure everyone gets heard, and no one’s rights are arbitrarily infringed.

Unfortunately, our hashtag-addicted, ADD culture doesn’t grasp nuances well. We’d rather, say, bully a pizzeria into closing for honestly answering a question about whether they’d be willing to cater a same-sex wedding. We won’t listen. We’d rather shout.

Had we listened, we’d know the owners of Memories Pizza hadn’t refused service to a soul. They were responding to a hypothetical situation. And they never said they’d turn away a customer who ordered a pizza. They said they wouldn’t cater a same-sex wedding, which they feel would imply that they condoned the union.

You can agree or disagree with that belief. But what could be more American than respecting their right to believe it and act upon it, free of persecution?

Now, if a case goes to court, and the government proves that it has a compelling reason to insist that the owners act in defiance of their beliefs, so be it. Due process has been followed. But to simply say their beliefs are garbage? That they aren’t to be respected because they don’t align with our own ideas of political correctness? That’s wrong.

As Founding Father James Madison, our fourth president, put it: “The Religion then of every man must be left to the conviction and conscience of every man; and it is the right of every man to exercise it as these may dictate. This right is in its nature an unalienable right.”

RFRA is designed to protect this right and ensure that it remains “unalienable.” The question now is will we give in to the shouting heads? Or stand up for what’s right?