In the Obama Economy, a Decline in Teen Workers 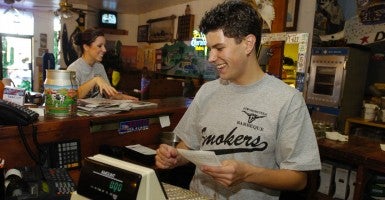 Teenagers who work enjoy numerous benefits. As Ron Lieber argues in his new book, “The Opposite of Spoiled,” they learn how to appropriately handle bosses, co-workers, and money, and they might learn something about what they’re good at. Lieber’s message is timely, because working teenagers are rapidly disappearing.

Data from the Current Population Survey show that the share of 16- to 19-year-olds who were neither working nor looking for work each March has risen around 15 percent since the late 1990s. Part of that is due to lower demand for their labor, but the trend was strong even before the 2008 economic crash.

Teens from affluent families are more likely to work during the school year. Sixteen and 17-year-olds whose families earn more than $68,000 are 50 percent more likely to be working or looking for work than teens from families making less than $21,000. (For these comparisons, we subtracted the teen’s wages from family income.)

Recent high school graduates have experienced a similar decline in full-time work. Those ages 18 and 19 are about half as likely to work full time in March as 18- and 19-year-olds in the late 1990s.

The decline of work—especially full-time work—has continued through the college and early career years. The share of 30-year-olds neither working nor looking for work rose 23 percent over the period studied. There has been a slight rise in educational attainment, which explains some of the decline in work. But neither higher education nor higher unemployment rates can fully explain the trend away from young people working.

For teens and twentysomethings, skipping the labor market often results in permanently lower earnings. It may also deprive them of the opportunity to hector the next generation about not working hard enough.