Can the Next President Deliver Better Defense? 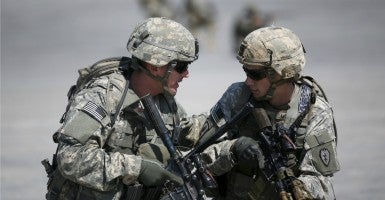 There are more than a few signals indicating President Obama has been a poor steward of the nation’s defense.

“Continuing to slash defense invites greater danger to national security while shamefully asking the country’s military men and women to do their jobs with shrinking resources,” wrote the chairmen of the Senate and House Armed Service Committees. “Without a course change, history’s judgment will be harsh, and rightfully so,” they concluded.

Congress isn’t the only one waving red flags. In February, The Heritage Foundation released the 2015 Index of U.S. Military Strength. This comprehensive survey of American military power rated the U.S. armed forces as only “marginally” prepared to defend vital American interests.

The Pentagon’s problem is that after six years of lackluster leadership, there are few signs promising change in the waning months of the Obama administration. Like it or not, the heavy lifting in righting the military ship will fall to the next president.

One tough task the next president will have to tackle is making the Pentagon work better. “Of course there is waste in the Pentagon,” wrote the committee chairs “and efforts to eliminate it must continue.” They also pointed out that just blindly cutting the defense budget is just as reckless as reckless spending.

It is not too early to start thinking about how the next team that will lead the Pentagon can do better. With that in mind, based on extensive survey of possible reform initiatives, their potential impact to yield cost-savings and improve performance, and a realistic assessment of the time and energy senior leaders could commit to a results-driven reform agenda, Heritage Foundation defense expert James Carafano has laid out a focused, realistic plan that just might work.

Step 1: Reduce Civilian Overhead. There are over 700,000 civilian defense employees. The overhead required for these employees competes with funding needed to enlarge the military capabilities the Defense Department requires to perform critical missions. Additionally, excessive bureaucracy impinges on the ability of the services to respond to threats.

Step 2: Implement Performance-Based Logistics. There is a reason why the world’s most productive and profitable companies are privately owned: They can install commonsense, cost-saving business practices that prioritize efficiency and put performance first. The Defense Department should implement private-sector best practices in order to realize savings. Studies have shown that performance-based logistics—a practice focused on maximizing efficiency—could yield savings of $184 billion over 10 years if implemented in weapons systems sustainment.

Step 3: Right-Size the Defense Department’s Vast Global Infrastructure. The diverse nature of the threats facing America today, as well as their wide geographic dispersal, makes it imperative that U.S. forces are properly positioned to defend critical national interests. Base Realignment and Closure, the congressionally authorized process by which the Defense Department manages its military installations, has been Washington’s tool for accomplishing this in the past, but better tools are needed to manage the military’s global footprint efficiently. Implementing better management of Defense Department infrastructure will make the Armed Forces more responsive to operational demands in far-flung environments. While this will not likely result in short-term savings, it will lay the foundation for a more cost-effective employment of forces over the long-term.

Step 4: Craft a Results-Based Acquisition System. Large, all-or-nothing initiatives have failed in the past because they have been too ambitious. A disciplined, systematic approach should be taken so that successive administrations can build upon it. Discussion of acquisition reform always starts and ends with diving into the minutiae, but reform needn’t be complex. Placing the right people at the top, revising or repealing outdated federal acquisition regulation, and streamlining the process to get mission-critical equipment to the warfighter in short order would go a long way.