The Palestinians Have Officially Joined the International Criminal Court. What the US Should Do. 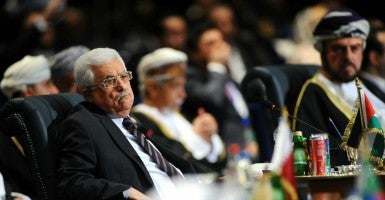 President of the Palestinian Authority, Mahmoud Abbas, speaks during the opening session of the Arab Leaders summit. (Photo: STR/EPA/Newscom)

The International Criminal Court, the first permanent international court established to try and punish individuals committing genocide, crimes against humanity, war crimes and the crime of aggression, now counts the Palestinians among its members.

Earlier this year, the Palestinian Authority announced their intent to accede to the Statute of the International Criminal Court and officially notified the U.N. Secretary-General, who serves as depositary of the treaty, on Jan. 6. Under Article 126 (2) of the Rome Statute, the accession enters “into force on the first day of the month after the 60th day following the deposit by such State of its instrument of ratification, acceptance, approval or accession.” That day for the Palestinians is April 1.

According to The Telegraph, the Palestinians “intend to formally lodge two cases with the court on or after April 1, 2015. One case will deal with Israel’s settlement construction, which is illegal under international law. The second case will investigate Israel’s conduct in the recent Gaza conflict.”

This would be consistent with their previous decision to lodge an ad hoc investigation with the court regarding the 2014 Gaza conflict. It is unclear how far the International Criminal Court will proceed with these cases, but a preliminary examination was announced in January 2015.

Palestinian officials denied that they had entered into a secret deal with Israel.  But even if the Palestinian Authority abstains from taking action against Israel, such abstinence is neither a permanent solution nor does it change the fact that the International Criminal Court has initiated a preliminary examination against Israel.

The State Department clearly stated its opposition to this action in January:

We strongly disagree with the ICC [International Criminal Court] Prosecutor’s action today. As we have said repeatedly, we do not believe that Palestine is a state and therefore we do not believe that it is eligible to join the ICC. It is a tragic irony that Israel, which has withstood thousands of terrorist rockets fired at its civilians and its neighborhoods, is now being scrutinized by the ICC. The place to resolve the differences between the parties is through direct negotiations, not unilateral actions by either side. We will continue to oppose actions against Israel at the ICC as counterproductive to the cause of peace.

This is entirely correct and was the reason Congress included a provision in the Consolidated and Further Continuing Appropriations Act, 2015, to prohibit American foreign assistance under the Economic Support Fund if “the Palestinians initiate an International Criminal Court judicially authorized investigation, or actively support such an investigation, that subjects Israeli nationals to an investigation for alleged crimes against Palestinians.”

The Obama administration has argued that funding should continue because the International Criminal Court has not initiated “judicially authorized investigation.” The desire by the administration to maintain funding to the Palestinian Authority may be even stronger considering recent heightened tensions between the Obama administration and the government of Prime Minister Benjamin Netanyahu and the reported reassessment of America’s relations with Israel.

Despite this imprecise language, congressional intent to cut off Economic Support Fund funding to the Palestinians is clear. This is the latest step in a series of provocative actions by the Palestinian Authority that merit a strong U.S. response. Congress should take steps to realize its intent.