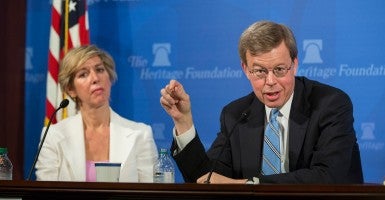 Wisconsin Gov. Scott Walker has added one of Washington’s leading advocates of military readiness to the ranks of advisers helping prepare him for a likely campaign for president.

Jim Talent, who represented Missouri in both the House and Senate before becoming a fellow at The Heritage Foundation, confirmed Thursday that he has joined Walker’s budding national security and foreign policy team.

“I was impressed by his understanding and—I’ll use a 50-cent word—how he contextualizes issues,” Talent said in a phone interview with The Daily Signal.

“I think he understands that being strong isn’t everything you need to do in foreign policy, but it’s the essential foundation for everything else,” added the former member of the Senate Armed Services Committee. “If you’re weak nothing works, right? Your diplomacy doesn’t work, sanctions don’t work.”

Talent didn’t use President Obama’s name at this juncture, but the clear implication was that Walker comes out better in the comparison. Talent added:

I also think he’s absolutely right when he says that leadership in foreign policy is really the same skill set as leadership in domestic policy. It’s about having the priorities, the right basic principles, making good judgments, and assembling a good team and asking questions until you get the answers you need.

These are some of the reasons why Talent, 58, said he signed on with Our American Revival, the committee Walker created in January to explore a race for president. After a strong appearance in Iowa, Walker enjoys a spot at or near the top  among at least 10 rivals for the Republican nomination in early presidential preference polls.

CNN first reported Walker had tapped Talent, who served eight years in the Missouri state legislature beginning at age 28. He next was elected to the first of four terms in the U.S. House of Representatives. Two years after an unsuccessful bid for governor in 2000, he won a special election to the U.S. Senate. In 2006, he narrowly lost re-election to Democrat Claire McCaskill.

Talent said he expects to be of most value to Walker on rebuilding military readiness, his signature issue as a member of both the House and Senate armed services committees. He also concentrated on that cause after leaving Congress, first as a distinguished fellow at The Heritage Foundation and, as of last year, at American Enterprise Institute as senior fellow and director of the National Security 2020 Project.

“I’ve been talking to [Walker] mostly about military preparedness, what the size and shape of the force should be to protect the homeland and our vital interests,” Talent said. “That was such a foundation of Reagan’s foreign policy, and people have missed it. It’s one of the prime reasons he was so successful.”

“He understands being strong isn’t everything, but it’s the essential foundation,” @JimTalent says of @ScottWalker

Talent agrees that the 2016 presidential election is likely to turn more on national security and foreign policy than any since 2004.

Americans “can see what’s happening around the world,” he said, from the Middle East to Russia and China to North Korea.

“Another big issue is going to be the withdrawal of our troops from Iraq after we had won the conflict, which has opened the door to everything that’s happening in Syria and Iraq now and indeed [terrorist group] ISIS’s growing influence throughout the region and around the world.”

“You get to know people, and you see where you click and who you think is the right leader at the time,” he said. “In politics, the moment often finds the man or the woman.”

Talent, who met Walker at AEI’s annual off-the-record World Forum gathering, said that, as a fellow Republican, he had paid attention to and admired the governor’s ability to “validate” his leadership with Wisconsin voters. Walker first won a recall election sparked by his confrontation with public employee unions, then secured a second term in November.

“Governor Walker is a proven conservative leader and winner,” Talent said. “It’s unusual for a person to be able not only to enact a big part of the conservative agenda, but also to so persuade the voters that it’s a battle you don’t have to fight again. He’d changed attitudes as well as laws.”

What were Talent’s first impressions?

“I found him to be exactly what he appears to be: He’s very down to earth, he has an air of confidence about him but there’s no arrogance with it. I like that. He’s just a regular guy.”