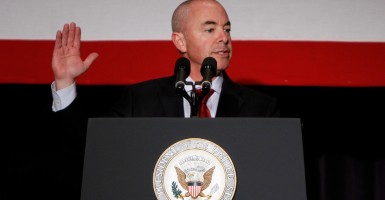 Alejandro Mayorkas, a deputy secretary at the Department of Homeland Security, gave favorable treatment to high-ranking political officials in helping them secure special EB-5 visas, according to the department’s inspector general.

According to the inspector general, Mayorkas “exerted improper influence in the normal processing and adjudication of EB-5 immigration program benefits.”

The inspector general found that during President Obama’s first term, Mayorkas, then-head of the U.S. Citizenship and Immigration Services, pressured officials of that agency to ensure that well-connected politicos were able to acquire EB-5 visas, which are supposed to provide green cards to individuals who invest in the U.S. or create jobs in the U.S.

In its investigation, the inspector general found “the number and variety of witnesses is highly unusual. It is also unusual that a significant percentage of witnesses … would talk to us only after being assured that their identities would remain confidential … That so many individuals were willing to step forward and tell us what happened is evidence of deep resentment about Mr. Mayorkas’ actions related to the EB-5 program … Their allegations were unequivocal: Mr. Mayorkas gave special access and treatment to certain individuals and parties … Employees felt uncomfortable and pressured to comply with managers’ instructions that appeared to have come from Mr. Mayorkas … Again, these comments were not from one or even a couple of disgruntled employees with axes to grind; rather these were individuals throughout the ranks of USCIS, in different locations, engaged in different functions, with different levels of experience.”

The IG report put special emphasis on the case of McAuliffe and his electric car company, GreenTech Automotive, calling Mayorkas’ actions “unprecedented.”  Mayorkas stated that McAuliffe left several “caustic” messages including one that was “laced with expletives at a high volume,” urging him to act.

Despite the ongoing investigation, Mayorkas was promoted by President Obama in 2013. Although the inspector general found no laws were likely broken, this behavior is not what the U.S. should expect from its senior government officials. Rather than being held to a higher standard, Secretary Jeh Johnson is doubling down in support of Mayorkas and Mayorkas himself stated that a “complete and total repudiation of the allegations against [him] is the only correct and just conclusion.”

In his current role, Mayorkas is critical to carrying out Obama’s executive actions on immigration, which may explain why the administration promoted and continues to support Mayorkas despite the inspector general’s findings.

Such behavior is one of the reasons the U.S. immigration system is widely considered broken. It rewards the well connected and political interest groups rather than serving the needs of the U.S. economy in a fair and justified manner.

Rather than fixing the system, the Obama administration has gone to great lengths to cripple and abuse the system for its own designs. Similarly, the administration’s push to promote green energy and the lack of transparency with which it has pursued this has led to billions of dollars wasted in taxpayer money.

The U.S. deserves better than a crony immigration system and crony capitalism that rewards politically connected groups over economic viability. It deserves a government that gives favoritism to none but provides opportunity to all.