Homeland Security Funding Expires Friday. Is Congress Any Closer to a Solution? 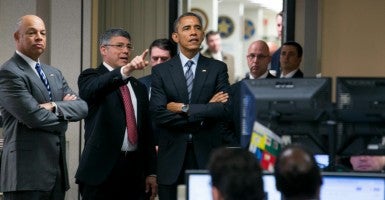 As the Feb. 27 deadline for funding the Department of Homeland Security looms, Congress appears no closer to a resolution to the ongoing funding dispute.

Homeland Security Secretary Jeh Johnson told George Stephanopoulos today on ABC’s “This Week” that it’s “imperative that we get it resolved.”

“Because if we don’t, by Friday at midnight,  the homeland security budget for this nation basically evaporates,” said Johnson.

The House recently passed a bill that simultaneously funds Homeland Security while defunding the president’s executive actions on immigration. Senate Majority Leader Mitch McConnell, R-Ky., said that he simply doesn’t have the 60 votes needed to pass the legislation in his chamber.

Johnson said that both chambers of Congress blame the other for the funding dispute:

“I’ve spent a lot of time on Capitol Hill talking to Democrats, Republicans, about how critical in these challenging times in particular, with the global terrorist threat, with the cybersecurity threat and with the harsh winter we’re facing right now, that we have a budget for homeland security. And I’m a little frustrated frankly because when I talked to my friends on the Senate side, they say, ‘Go talk to the House.’ And when I go talk to my friends on the House side, they say, ‘It’s not me. I passed my bill. Go talk to the Senate.’ So, they’re literally doing this.”

“By refusing to bring a clean bill to fund the Department of Homeland Security to the floor, Republicans are saying that tearing apart families is more important to them than protecting the United States and keeping Americans safe. If my colleagues want to fix our broken immigration system, we are happy to have a debate. But we should not put our national security at risk in the meantime.”

Johnson echoed the wishes of Senate Democrats for a “clean” funding bill.

“My hope is that in the four working days they have this week, they’ll finally come together and do the right thing and passed an appropriations bill, free and clear of any efforts to defund our executive actions,” said Johnson.

Also appearing on “This Week,” Sen. Lindsey Graham, R-S.C., said that he believes the “executive orders were illegal,” but he is “willing and ready to pass a DHS funding bill.”

“I agree with the Texas judge who said that the executive orders were illegal,” said Graham. “I hope Republicans will come together and back the court case, file a friend of the court brief with the court and fund DHS. I am willing and ready to pass a DHS funding bill and let this play out in court.”

[email protected] said that the immigration battle belongs in the courts.

Graham added that the “worst possible outcome for this nation is to defund the Department of Homeland Security given the multiple threats we face to our homeland.”

Graham said that the immigration battle belongs in the courts.

“I hope my House colleagues will understand that our best bet is to challenge this in court, that if we don’t fund the Department of Homeland Security, we’ll get blamed as a party. And to anyone who is watching the world as it is, I’ve never seen more terrorist organizations with more safe havens, with more money, with more capability to strike the homeland than I do today. And that’s a direct result of a failed foreign policy by President Obama. And the worst thing to do is add gasoline to the fire by having the Republican Party defund the Department of Homeland Security.”

Dan Holler, communications director at Heritage Action for America, the sister organization of The Heritage Foundation, said that “our nation would be better served if Secretary Johnson were focused on his job instead of trying to implement a scheme to grant legal status to those who ignored our nation’s immigration laws.”