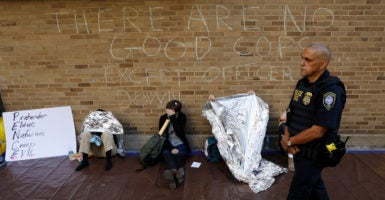 The Department of Homeland Security is warning employees of a “sharp increase in the overall number of general threats” against them after a senior DHS official found a headless animal carcass left on his front porch, said an official with knowledge of the incident.

DHS acting Deputy Secretary Claire Grady issued the warning in a letter to employees on Saturday, spurred by the incident at the senior official’s home in Washington, D.C., reported ABC News.

The “heightened threat against DHS employees,” as Grady described it, comes amid public protests against family detention and other immigration policies under the administration of President Donald Trump.

“If you see anybody from that Cabinet in a restaurant, in department store, at a gasoline station, you get out and you create a crowd,” Waters said. “And you push back on them. Tell them they’re not welcome anymore, anywhere.”