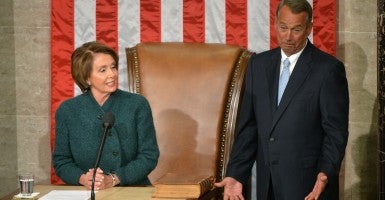 Washington is exhibiting symptoms of schizophrenia.

At the same time that lawmakers are debating their budget blueprints to eliminate deficits before the end of the decade, the Boehner-Pelosi deal to address the looming Medicare physician payment cuts proposes to add $141 billion to the deficit over the same period.

Any deal, especially one that would increase mandatory spending, as this fix would, must be fully paid for. And that would merely meet the minimum requirement.

Each dollar’s increase in the federal deficit reduces domestic investment by about 33 cents.

The Boehner-Pelosi deal fails on all fronts. Officially titled the Medicare Access and Children’s Health Insurance Program Reauthorization Act of 2015 (H.R. 2), the deal would add $141 billion to the deficit over the next ten years, and that is before including this spending’s impact on interest costs.

With a cumulative deficit projected at more than $7.5 trillion over the next decade, any discussion to add to the deficit should be a non-starter.

Furthermore, the larger the deficit, the bigger the economic hit.

On the basis of empirical literature on government deficit spending, each dollar’s increase in the federal deficit reduces domestic investment by about 33 cents, as the Congressional Budget Office explains.

Less private investment in the U.S. economy means lower economic growth which directly translates into a lower standard of living for American families.

Congress should debate ways to decrease deficits and lower the national debt to unshackle the economy and improve American living standards. The Boehner-Pelosi Sustainable Growth Rate deal would do the opposite.

Medicare is one of the largest drivers of growing spending. It alone consumes more than one-fifth of the budget and its long-term debt at $35 trillion is projected at nearly twice the size of the current national debt.

The government has promised benefits to seniors now and in the future that are unaffordable as they are. The Boehner-Pelosi deal would make them more unaffordable yet.

As Heritage Medicare expert Bob Moffit explains in light of Medicare’s massive financing challenges, “the Medicare structural reforms [in the deal] are timid and their fiscal impact is small.” Moffit lays out an alternate path to “improve the current Medicare program, [easily] finance replacement of the flawed SGR, and lay the groundwork for real Medicare reform, based on “premium support.”

It takes more than a symbolic vote on a budget blueprint to commit the budget to a path to balance. At the very least it takes a commitment to stop adding to the deficit. The Pelosi-Boehner Sustainable Growth Rate deal should be dead on arrival.