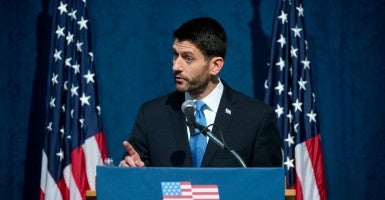 House Speaker Paul Ryan became the unwilling engineer of the spending locomotive that John Boehner built. But he says the appropriations process established by his predecessor “is no way to run a railroad” and promises sweeping reforms.

Before a packed crowd gathered Tuesday for a breakfast event hosted by Politico, Ryan promised that the “number-one” thing to expect from the House of Representatives in the new year is that “we’re going to go back to regular order on appropriations.”

Congress is scrambling to pass legislation to fund the government and avoid a shutdown before the end of the year. Rather than voting on individual bills funding specific programs, lawmakers will approve the totality of government spending with a single vote.

Under Boehner, the former speaker, the House made a habit of rolling smaller appropriations into a single package—called an “omnibus” inside the Beltway.

Long a budget hawk, Ryan delivered one of his strongest rebukes of that process yet.

“We shouldn’t be putting appropriations bill[s] together this way,” he said. “We shouldn’t have a handful of people in a room putting together a trillion-dollar spending bill.”

Barely six weeks into the job, his team says, Ryan has been forced to follow the process established by his predecessor. The new speaker has been locked in secret budget talks with his Democratic counterpart, Minority Leader Nancy Pelosi of California, herself a former speaker.

The two met for dinner Friday to discuss the deal and get to know one another better—an event Ryan said he doesn’t consider “newsworthy.”

Though following Boehner’s blueprint, under Ryan’s leadership, the House calmed the media hysteria over a possible government shutdown that drove headlines in the past.

Last week, Ryan dismissed a Dec. 11 deadline as “arbitrary” and cobbled a stopgap-spending patch to temporarily fund the government and give lawmakers more time to make a deal.

Ryan promised to put the House on track toward an overhaul of the appropriations process, saying:

This should be done under what we call regular order, where we divide these bills up into 12 bite-size portions. We bring these bills to the floor. Let the experts in the committees, who are in charge of spending, write the bill; members, if they want, through the amendment process can try and rewrite the bills.

Since picking up the speaker’s gavel Oct. 29, Ryan has made process reform a key part of his agenda. He has decentralized leadership’s authority while empowering individual members and committees.

Ryan described this effort to return the House to regular order like “turning a battleship,” and he said GOP leadership has “made some pretty good turns, but we still have more to go.”

Asked whether he enjoys the new job, Ryan said he’s “not a person who wants power” and highlighted his plan to reduce the role of Washington.

“If I can use this gavel to decentralize power out of Washington and back to the people, where it belongs, then I feel I can make a difference, and that’s what I like most,” he said.