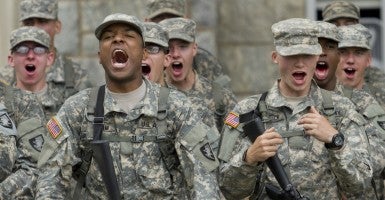 To be clear, even if this were a new thing, it still would not be a violation of Posse Comitatus—the rule that prohibits the use of Federal (Title 10) military forces from acting in a law enforcement capacity. Conducting exercises in civilian environments does not do that in any way.

Additionally, extensive coordination with state and local governments and law-enforcement agencies takes place in the planning stages for such exercises to ensure no misunderstandings or confrontations occur.

The exercises, dubbed “Jade Helm,” apparently will include troops operating in civilian clothing who will be simulating operating behind enemy lines doing the classic mission of unconventional warfare. This is the military’s term for guerrilla operations (U.S. unilateral, or in support of friendly elements). The choice of several of the southwestern states is clearly because there are so many citizens in those states who historically are favorable toward the military and therefore are willing to role-play to be supportive.

The Army Green Berets have done similar training in North Carolina since the late 1950s. Several generations of families have acted as guerrilla chiefs and auxiliary support for these American heroes as they develop the skills they later apply overseas to promote America’s interests. The American Southwest provides terrain for our troops similar to what they might face in key parts of the world that are at risk today.

It is heartening to know the Special Operators have scrapped together enough training funds in the midst of the ongoing Budget Control Act Sequestration cuts to maintain these vital skills. The ability to conduct these high-risk, highly complex missions must be honed, and realistic training is the only way to do that.

The proud patriots of the American Southwest, and their elected officials should be congratulated for assisting in this effort.