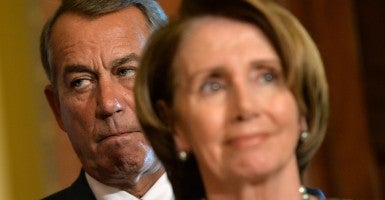 Why are Republicans cutting a deal with Nancy Pelosi to throw an extra $400 billion onto the national debt and calling it entitlement reform?

This latest misguided venture should concern all fiscal conservatives—or anyone who likes the idea of keeping our government on a sustainable trajectory.

Almost two decades ago, Congress decided to tie reimbursements for doctors taking Medicare patients to a “Sustainable Growth Rate” or SGR. This would pay doctors more if Medicare was in the black, less if it was in the red, and ideally balance things out year-by-year.

Since Medicare has been bleeding money for some time, however, this would instantly result in a 21 percent pay cut for doctors taking Medicare patients. So in a yearly ritual, Congress has temporarily blocked the cuts from taking place 17 times—a process which has become known as “doc fix.”

Congress has debated making this fix permanent for years; nobody wants to add to Medicare’s problems by shorting doctors for seeing patients. Unfortunately, the plan being proposed by Speaker John Boehner looks to pay for these reimbursements by adding $400 billion to the national debt over the next 20 years. It’s an unfortunate and unnecessary sore thumb in the midst of other good reforms.

Perhaps this is what comes of Republican leadership courting Democrats to pass legislation in defiance of their own party. They’ve already made a habit of cobbling together a minority of Republicans with the Democrat caucus to pass odious bills.

Why are Republicans cutting a deal with Nancy Pelosi to throw an extra $400 billion onto the national debt?

This isn’t an unsolvable problem.

There are ways to find the savings within Medicare already, whether through a small bump in the Medicare eligibility age (modernizing a standard originally set in 1935) or reducing taxpayer subsidies for the wealthiest Medicare recipients (something even the left can get behind), or intensifying price competition in the Medicare Advantage program. Simply combining and streamlining Medicare Parts A and B would save $115 billion over 10 years, while protecting seniors from catastrophic costs.

Further, Heritage Foundation analysts have found 106 ways to cut the budget and reduce the size of government across the board.

There are scores of redundant or unnecessary federal programs which are black holes for our tax dollars. They can and should be eliminated before congress considers piling more debt on Americans to prop up ailing entitlement programs.

And wouldn’t you know it, many House Republicans were saying the same thing—back in 2009, when the exact same situation happened under Democrat control. Here’s how Boehner framed it on Nov. 19, 2009:

That’s the real issue here, the fact that there is no pay-for here. There is no offsetting other types of spending. There are no increases in revenue somewhere to cover this. It’s just going to be dumped onto the backs of our kids and grandkids. The American people want us to relearn fiscal responsibility. My colleagues on my side of the aisle over the course of this year have stood up, I believe, for fiscal responsibility. And if we’re going to get our economy going again, we’d better get our fiscal house in order as well.

Proper Medicare reimbursement for physicians without adding to the debt should be a priority. Congress’ unwillingness to make cuts to ineffective programs means they will be increasing debt and raising taxes forever.

There are real reforms on the table that Congress can and should consider. Adding $400 billion to our national debt isn’t one of them.