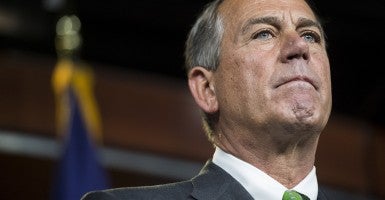 As lawmakers prepare to kick off the 114th Congress tomorrow, a group of nine Republican members say they won’t support House Speaker John Boehner in his quest to serve a third term as the House’s leader.

Dubbed the “Gang of Nine” by Oklahoma Rep. Jim Bridenstine, who announced his opposition to Boehner last week, two of the GOP lawmakers have stepped forward as candidates. The seven others have publicly said they wouldn’t be voting for Boehner.

>>> Update:  Incoming Rep. Gary Palmer, R-Ala.,  said he will not vote for Boehner, bringing the number of announced opponents to 10. Palmer noted that he promised Alabama voters during a Republican primary that he would not support returning the Ohio Republican to the speakership.

Republican lawmakers met in November to cast ballots for House speaker and other Republican leadership positions. There, Boehner won the support of the conference for a third term.

With the official vote happening Tuesday, however, Boehner is now facing opposition from conservative members of the conference. All House members will meet tomorrow—the first day of the 114th Congress—to vote for the next speaker as the first order of business.

Boehner needs 218 votes—a majority—to remain speaker. To block him for getting a majority on the first ballot, 29 Republicans must oppose him. There are 246 GOP lawmakers in the House after New York Rep. Michael Grimm resigned last week.

Democrats plan to nominate California Rep. Nancy Pelosi for speaker. However, with just 188 Democratic lawmakers in the House, she will be unable to win a majority of votes unless Republicans vote for her or abstain in large numbers.

Should Boehner fail to secure the 218 needed to win House speaker on the first ballot, members will continue voting until a member secures a majority to win.

Despite growing opposition from conservatives, Boehner’s office remains confident he will retain his post as speaker.

“Rep. Boehner was selected as the House Republican Conference’s choice for speaker in November, and he expects to be elected by the whole House this week,” Michael Steel, Boehner’s spokesman, told The Daily Signal today.

According to a national survey of more than 600 Republicans, 60 percent of voters said they want a new House speaker. Additionally, just 25 percent believe Boehner should be elected again.

Here are the two Republicans running against Boehner for speaker, followed by the seven GOP lawmakers who said they would oppose him.

“At this point, the speaker’s election is not about a particular candidate. It is about whether we keep the status quo or make the change the country demands. I am putting forward my name for consideration as speaker and hope that with a new speaker, be that me or someone else, we can fight for the ideals and principles that the voters wanted when they elected us in November.”

“The American people have allowed us to choose who is best suited to lead the House by electing a deep bench of diverse and qualified members. Our Republic is built on choice, and if needed, I would stand up to give our members that option.”

“While I like Speaker Boehner personally, he will not have my support for speaker,” says @DaveBratVA7th

“In recent days and weeks, I have given careful consideration as to how I would cast my vote for speaker of the House. I do not cast this vote as an individual, but on behalf of the citizens of Virginia’s 7th District who sent me to Washington to act as their representative. While I like Speaker Boehner personally, he will not have my support for speaker.”

“The CR/omnibus legislation sufficiently undermines the checks and balances enshrined in the Constitution that it warrants my pending vote against the speaker. John Boehner went too far when he teamed with Obama to advance this legislation. He relinquished the power of the purse, and with it he lost my vote.”

“America needs bold leadership from the House of Representatives that breaks from the status quo and embraces an open and transparent legislative process. Our country deserves getting back to regular order and holding wrongdoers accountable for their actions. This will require courage, not fear. It is time for leadership that will stand up for America and the Constitution.”

“I want us to have a leader who is willing to stand up for conservative religious principles I believe in. It is to make a statement, and it’s based on months of consideration.”

“We need a speaker who will help us all keep our oath, including his own, to the Constitution, not one who has consistently blocked our efforts to keep ours. I will vote for an alternative candidate for speaker. I can’t vote for John Boehner again.

“Voting against the speaker means jeopardizing your committee assignments, your fundraising opportunities and literally your political career. Critics may call my vote unwise for these reasons, but I challenge them instead to defend the undemocratic manner in which the speaker has moved legislation through the House of Representatives.”

“After careful consideration, I have decided to vote for a new speaker of the House. I have great respect for Speaker Boehner, for his time in office, and for the work we’ve done together. However, I do believe it is time to make a change.”

This report has been updated to reflect Palmer’s position.

>>> McConnell: Obama ‘Not Going to Like’ Republican Congress’ Agenda