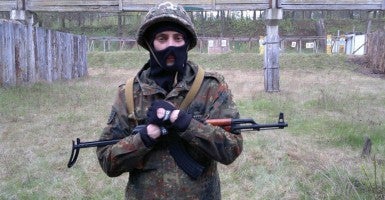 Maxim Masur, 25, a member of the Aydar civilian volunteer battalion, fought in a battle near Luhansk in June 2014. (Photo courtesy Maxim Masur)

KYIV, Ukraine—When Maxim Masur deployed to the front lines of the Ukraine conflict last June with the Aydar Battalion, his unit only had one assault rifle for every 10 men.

“We had to take Kalashnikovs off of the dead enemy,” said Masur, 25, who served near the eastern Ukrainian town of Luhansk. “We had no other choice if we wanted to live.”

Despite being outgunned by pro-Russian separatists, who he claimed were being supplied by Russia, Masur survived and returned to Kyiv to train new recruits.

But it is unclear where the assault rifles that Masur and his comrades confiscated on the battlefield ended up, highlighting the shadowy origin and fate of many of the weapons used in the year-old Ukraine conflict.

This murky environment feeds a growing black market of military weapons that threatens Ukraine’s security and political stability as the country emerges from last year’s revolution and continues its fight against pro-Russian separatists. “The situation is getting more and more dangerous, and can get out of control at any moment,” said Georgiy Uchaykin, head of the gun holder’s union of Ukraine, in an interview with the Ukrainian newspaper Korrespondent.

Uchaykin emphasized the ease with which lethal military hardware could be bought and sold in eastern Ukraine, adding that the situation risks becoming a “Somalia scenario.”

“Today it’s not just simple to get any kind of weapon you want, it’s very simple,” he said. “In any eastern city there’s a man who can get you pretty much any type of weapon you wish.”

According to Ukrainian news reports and government estimates, about 500,000 guns have entered Ukraine’s black market (including assault rifles, machine gun and pistols) since the conflict in the Donbas began in April 2014.

Selling weapons on the black market is a lucrative business. Guns and ammunition can be bought for cheap in the conflict areas and then marked up by as much as 500 percent for sale in Kyiv and western Ukraine. A member of the Azov Battalion at a training camp near Mariupol in September 2014. (Photo courtesy Valentyn Onyshchenko)

According to volunteer battalion members who asked not to be named due to security concerns related to upcoming combat deployments, the current price for an AK-74 assault rifle on the black market in the conflict-ridden Donetsk and Luhansk regions is about $500, while the same weapon can be resold in Kyiv for about $2,500.

The Ukraine conflict has spawned a black market of military weapons that threatens to further destabilize to ex-Soviet country.

“The low prices are allowing people to buy weapons in huge quantities and then resell them in central or western Ukraine,” Uchaykin said, according to Korrespondent. “It’s a serious business for some people.”

These loose weapons have become a headache for Kyiv.

For one, a jump in weapons-related crime nationwide has been attributed to weapons smuggled back from the conflict areas.

According to the Ukrainian General Prosecutor’s Office, there were around 2,000 weapons-related crimes in Ukraine in the first nine months of 2014, compared with 581 during the same period in 2013—a 345 percent increase in one year.

The 2014 crime data excludes the breakaway region of Crimea and Ukraine’s eastern territories.

“Crimes committed by firearms have increased exponentially since the war began,” said Mykhailo Khiraldo-Ramirez, 31, a Ukrainian lawyer and an instructor with the 318th Kyiv Territorial Defense Battalion. “Now the government is more afraid of armed citizens than of Russians.” In addition, a string of bombings and disrupted terrorist plots in government-controlled cities including Kyiv, Kharkiv and Odessa have Ukrainian officials on edge that smuggled arms and explosives will be used for terrorism and sabotage outside the conflict area.

In October, the Security Service of Ukraine (SBU) seized a weapons cache in Kyiv, which included portable air defense systems and rocket-propelled grenade launchers. According to a press release on the SBU’s website, the weapons were linked to a terrorist cell that was supported by Russian special forces, and were part of a plot to assassinate a Ukrainian parliamentary candidate.

On Tuesday, police at a train station in the western city of Lviv, which is about 800 miles from the conflict area, discovered a backpack with an assault rifle, silencers and magazines filled with ammunition.

“If other countries are threatened by international terrorist groups, mainly associated with Islamists, Ukraine is facing terrorists who are directed, developed and equipped by Russia,” said Olexandr Skypalsky, former deputy head of the Security Service of Ukraine, according to the Ukrainian news agency Gordon.

Ukraine, the United States and other NATO countries have accused Russia of sending arms and troops into Ukraine. The Kremlin denies assisting the separatists.

The biggest sources of illegal weapons are stockpiles left behind by retreating separatists.

On Thursday, the SBU announced it found a weapons cache at an abandoned separatist checkpoint near Donetsk. Among its contents were anti-tank grenade launchers and a flamethrower. Weapons left on the battlefields by retreating and killed soldiers also end up on the black market.

“The streets were littered with weapons and ammunition,” said Valentyn Onyshchenko, a reserve lieutenant in the Ukrainian army and journalist who was in Debaltseve during last month’s siege. “You could take whatever you wanted, and no one would stop you.”

Ukraine’s laws for firearms possession are fairly restrictive, leaving guns out of reach for most civilians except for hunters, who usually own shotguns. The punishment for owning an illegal weapon in Ukraine is 5 years to 15 years in prison.

But Ukraine’s civilian volunteer battalions are a legal grey area, and it remains unclear if Kyiv will demand the groups hand over their weapons when the war is over.

Volunteer battalions—there are now more than 50 in Ukraine—operate outside of the military’s chain of command and regulatory oversight and have played a key role in Ukraine’s war effort, particularly in the early stages of the conflict when pro-Russian separatists consistently outgunned the regular Ukrainian army.

Volunteer battalion soldiers, however, are not eligible for government pensions or health care, including treatment for post-traumatic stress.

Valeriy Krivchach, a reserve lieutenant in the Ukrainian army, said the government in Kyiv is concerned that volunteer battalion veterans won’t be able to reintegrate into civilian life after the war, creating a dangerous mix of thousands of men with combat experience, little hope for a job and access to unregulated military weapons arsenals.

“It’s controversial, the volunteer battalions are a big problem,” he said. “It’s a problem because when the war is over they can just change their direction, come to Kyiv and lead another revolution.”

Masur, meanwhile, is set to return to the front lines with the Aydar Battalion at the end of March. He has become pessimistic about the prospects for peace and is anxious to return to combat. “They were shooting at us the day the cease-fire went into effect,” he said. “We know that if we don’t stop the separatists in the east, they will come all the way to Kyiv.”

When asked if his unit had enough weapons, he replied confidently: “Yes. Weapons are no longer a problem.”