Should Catholic Schools Be Forced to Fund LGBT Student Groups? 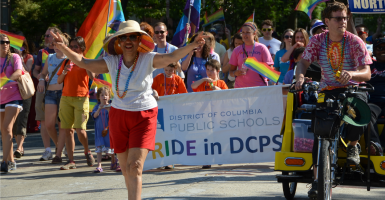 Religiously affiliated schools in the nation’s capital could soon be forced to formally fund and recognize student groups like LGBT organizations, whose mission conflicts with the schools’ religious beliefs.

The measure in question, called The Human Rights Amendment Act of 2014, is one of two pieces of legislation passed by the D.C. Council that supporters say will prevent LGBT students from being discriminated against, and opponents argue is an intrusion on the freedoms to religion and speech.

Catholic University of America, located in Washington D.C., is one institution that feels threatened by the proposal.

“It’s the government telling us how to run our school and the government telling us how seriously we can carry out our religious mission,” said Larry Morris, general counsel for Catholic University. “We should be able to operate our school with regard to benefits we provide to employees, with regard to recognition, operation and funding of student organizations, in a way that’s consistent with our faith.” Congresswoman Eleanor Holmes Norton, D-D.C., sees it differently. She says the measure will protect students from being discriminated against by their schools or universities for their sexual orientation.

“[W]e are not going to have our LGBT students stigmatized and denied by their own universities and schools,” she said last week in a press release defending the legislation.

Morris maintains, “It’s not a matter of discrimination at all.” He says students are already free to meet and discuss issues of their choice. The difference, he says, is that under the Human Rights Amendment Act, Catholic schools would be forced to formally recognize and possibly devote funding to those groups.

“Any group of students can meet and do or talk about most anything,” Morris said. “All we are talking about here is the government requiring us to recognize and give a platform to an organization that would advocate positions that are contrary to the church’s teaching.”

The Human Rights Amendment Act would eliminate the long-standing “Armstrong Amendment,” which was created to exempt religious schools in D.C. from being forced into violating their beliefs about human sexuality by “promoting, encouraging, or condoning any homosexual act, lifestyle, orientation, or belief.”

>>> Commentary: Protecting Freedom in the District of Columbia

The Human Rights Amendment Act won the approval of the D.C. Council and was signed by Mayor Muriel Bowser earlier this year. But because all D.C. legislation must be transmitted to Congress for a 30-day review period before it can take effect, Congress—with the president’s signature—has the power to stop it.

On Wednesday, Sens. Ted Cruz, R-Texas, and James Lankford, R-Okla., attempted to do just that, introducing resolutions of disapproval that, if passed and signed by the president, would effectively overturn both the Human Rights Amendment Act and the Reproductive Health Non-Discrimination Act, which critics say could force pro-life organizations into hiring pro-choice employees. Cruz and Lankford will face strong pushback from a coalition of about 50 national and local groups, which on Monday sent a letter urging Congress to “oppose any effort in Congress, including through resolutions of disapproval, that would prevent two bills recently passed by the District of Columbia Council from taking effect.”

In it, they wrote:

Because of the central role that access to education plays in personal and professional development, eliminating discrimination in education has long been recognized as a government interest of the utmost importance. D.C. has a substantial and compelling interest in ensuring that educational institutions in the District afford all students equal access to school facilities and services.

Tom Burnford, the secretary for education for the Archdiocese of Washington—which oversees 20 K-12 schools in D.C.—argues that Catholic schools are being discriminated against.

“I think the irony is…it’s the government getting involved in a religious school in the name of antidiscrimination, but what it’s really doing is discriminating against the school by penalizing those schools that don’t share the government’s view on so-called marriage and human sexuality,” Burnford told The Daily Signal.

Burnford believes the legislation would undermine the purpose of parents choosing to send their children to religiously affiliated schools.

“[Parents] choose to send their child to a Catholic school because they know their child or high school student will be taught a specific set of values—a specific faith,” he said. “What’s problematic is when the government starts interfering to determine what those values are.”