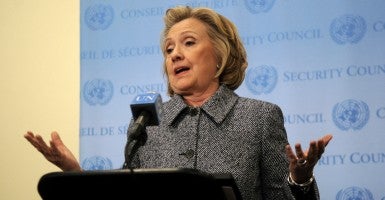 Hillary Clinton talked to reporters about her use of her personal e-mail while at the State Department. (Photo: Dennis Van Tine/ZUMA Press/Newscom)

Former Secretary of State Hillary Clinton finally addressed the festering issue of her use of a private email account for official State Department business in a press conference Tuesday at the United Nations.

Clinton said she turned over 50,000 emails to the government archives, as required by law, but she also revealed 32,000 emails had been deleted.

Clinton further said she would refuse to turn over the private email server located at her home in Chappaqua, N.Y. A lot of people will want to know what was in those deleted emails. Clinton is asking Americans to take her word that she deleted nothing of relevance to her official role and business for the U.S. government.

Among those keenly interested in the content is the House Select Committee on Benghazi and its chairman, Rep. Trey Gowdy, R-S.C., who is asking Clinton to turn over the server for investigation. Since starting its work last summer, the committee has sought evidence of communication within the State Department regarding security breaches at the Benghazi diplomatic facility and all the other issues related to the Sept. 11, 2012, attack. According to Gowdy, the committee’s investigators noticed a gap of several months in the trail of State Department emails on Benghazi.

Clinton’s use of her private account could account for at least some of the missing emails. Notably, Fox News also reported last week, that several key Clinton aides also had the habit of using private email accounts, including State Department Chief of Staff Cheryl Mills.

Mills, it should be recalled, oversaw the document search at State for Benghazi-related materials, which was the subject of a Daily Signal expose by Sharyl Attkisson. Another staffer with a private email habit was Huma Abedin, Clinton’s deputy chief of staff. Both aides potentially have emails of keen interest to the Benghazi committee’s investigation.

Critics of the Benghazi investigations repeat the mantra that congressional committees have gone over the same ground in report after report without finding anything new. Yet, vital new information continues to be revealed as Freedom of Information Act requests make their way through the courts.

A recent example is the 486 pages of Pentagon documents obtained by the group Judicial Watch, which showed that orders for a military response to Benghazi were drafted the day after the Benghazi attack.

It appears we still have a lot more to learn about Clinton’s role in the Benghazi scandal—before, during and after.

Investigators are doing a public service as they demand to follow where the email trail leads them.