Fed Chair Janet Yellen Met With a Coalition of Conservatives Friday. Here’s How the Meeting Went. 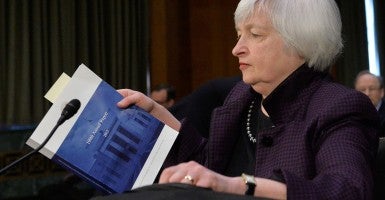 In December, a coalition of conservative groups led by American Principles in Action requested a meeting with Yellen after she had a similar meeting with left-leaning groups.

She accepted their invitation.

In an interview with The Daily Signal, Steve Lonegan, APIA’s director of monetary policy, said he was surprised by her acceptance.

“Yes, I was surprised,” said Lonegan. “Never in the Fed’s 101 year history have they done anything like this. There were conservatives, libertarians…it was a cool dynamic.”

“It went very well, it was a terrific meeting,” said Lonegan. “We provided compelling background information and ideas.”

Lonegan said that the right needs to make clear that they have the key to economic prosperity for all Americans.

“Our key message was that the left does not have a monopoly on concern for low income Americans,” said Lonegan. “Sound economic policy is the best path to growth.”

The coalition included the Cato Institute, the Atlas Network and The Heritage Foundation—the parent organization of The Daily Signal.