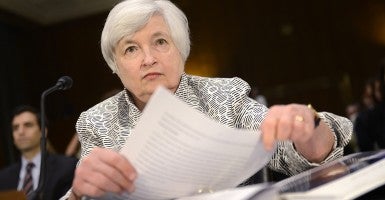 “Conservatives cannot sit back and allow liberals to have sole voice with the Federal Reserve System,” says @Lonegan

Twenty representatives from more than a dozen conservative groups hand-delivered their request to the Federal Reserve last week seeking a meeting with Yellen.

The groups, led by American Principles in Action, include Americans for Tax Reform, the Jack Kemp Foundation and Citizens for Limited Government.

The letter states that “thought leaders from the center-right” deserve the same opportunity because “the left by no means has a monopoly on concern for unemployment and wage stagnation.”

Monetary policy is at the root of economic stability, critical for assuring equitable prosperity for all Americans. Conservatives are committed to building a sound economy where everyone, rich and poor, can grow and prosper.

The left has met with Janet Yellen in an effort to influence monetary policy. Conservatives cannot sit back and allow liberals to have sole voice with the Federal Reserve System.

Conservatives have the science, history, facts and philosophy for advancing good money that assures equitable prosperity for all Americans.

In November, Yellen met with representatives from several left-leaning groups, including  The Center for Popular Democracy, a group that, according to its website, works with “high-impact base-building organizations, organizing alliances and progressive unions” to advance a “pro-worker, pro-immigrant, racial and economic justice agenda.”

Ady Barkan, an attorney with the center, told the Associated Press that she thought Yellen and other Fed officials “listened.”

“It was a very good conversation,” said Barkan. “They listened very intently, and they asked meaningful follow-up questions.”

According to The Daily Caller, the closed-door meeting was a source of frustration for conservatives because “the press was shut out of the meeting and no transcript made available.”

The letter from the conservative groups argues that they deserve a similar meeting because “an evenhanded insight on achieving our shared goal of job creation and economic mobility would facilitate steps toward realization of this mutual objective.”

You can read the full letter here.