Surprising Number of Americans Affected by Police Taking Their Property 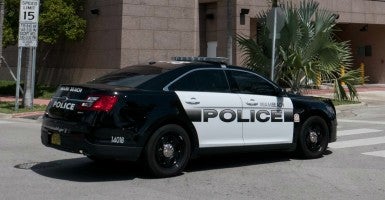 Each dollar of revenue generated by the forcible seizure of property is a dollar taken from a potentially wholly innocent person. (Photo: Cristobal Herrera/EPA/Newscom)

New polling data is shedding light on the widespread impact of pervasive property seizures under civil asset forfeiture laws. In both Utah and Florida, a substantial percentage of respondents—nearly one in ten, in fact—acknowledged that either they themselves or someone they knew had property seized without criminal charges being filed.

Civil asset forfeiture laws enable law enforcement officials to take property suspected of being used to commit or derived from a criminal act. Originally ramped up in the 1980s to target organized crime and drug organizations, civil forfeiture has since expanded dramatically. Today, more than 400 federal laws and countless state laws authorize the seizure and forfeiture of cars, cash, and real property, and these seizures are often based on little, if any, evidence (as opposed to mere hunches). Once forfeited, the seizing agency gets to keep and spend the revenue as it sees fit.

Much has been made of how widely used the once niche law enforcement tactic has become. In 2014, The Washington Post highlighted the fact that over a 13-year period, state and local law enforcement organizations conducted nearly 62,000 vehicle searches resulting in cash seizures along America’s highways and roads that netted more than $2.5 billion. One point seven billion dollars of that sum flowed back to the original seizing agency via the federal equitable sharing program—and every penny was beyond the control of local or state legislators.

In a 2001 survey of 1,400 law enforcement executives, 40 percent of respondents reported that they considered forfeiture revenues to be a necessary component of their budgets. Since 2008, 298 police and sheriffs’ departments and 210 task forces have seized the equivalent of 20 percent of their budgets each year.

This is not the way that law enforcement financing is supposed to work. Each dollar of revenue generated by the forcible seizure of property is a dollar taken from a potentially wholly innocent person. Law enforcement proponents of civil forfeiture contend that they seldom, if ever, take money from people not actively involved in criminal activity, yet an amazing number of abusive forfeiture stories continue to surface. The fact is, too many law enforcement officers appear to be wholly indifferent (or at least insufficiently sensitive) to the actual guilt or innocence of the person whose life savings or family home is on the line.

The situations in which these respondents indicated that they or an acquaintance had had his property seized are known to be prone to abuse. Fifty-four percent of these respondents in the Florida poll and 44 percent in the Utah poll said the property seizure occurred during a traffic stop. These roadside seizures tend to follow a common pattern: A driver, often one with out-of-state plates (meaning he is less likely to return to challenge a forfeiture), is pulled over for a moving violation.

The officer then determines that the driver is “nervous” or “acting suspiciously” and on this basis asks whether he is carrying cash and whether the driver would consent to a search of the car. If the driver refuses, a drug dog may be called in to sniff the vehicle, and if the dog “alerts” to the scent of narcotics, the officer will then conduct a search.

At this point, if any cash is discovered, it is often presumed to be drug money even if no drugs are found and the driver has evidence that the money is legitimate. The driver may then be pressured to disclaim all ownership of the cash on the spot to avoid being arrested or charged with a crime. In one of the more outrageous cases, officers in Tenaha, Texas, threatened to take children from their parents if the parents refused to cooperate.

In Utah, 11 percent of the respondents reported that the property seizure took place “in a public place, such as an airport, train station, or park.” Airports in particular are popular locales for law enforcement entities seeking easy forfeitures.

Security screenings and bag inspections make it all the more likely that anybody transporting currency—which is not a crime— will be uncovered. In fact, the Drug Enforcement Administration (DEA) was recently taken to task in a Department of Justice Office of the Inspector General report for entering into an agreement with a Transportation Security Administration (TSA) official to pay a reward to the TSA man for tipping off DEA agents to the presence of cash in passenger luggage.

The inspector general report concluded that the deal “violated DEA policy” and potentially violated individuals’ 4th Amendment rights “against unreasonable searches and seizures if it led to a subsequent DEA enforcement action.”

It can be easy to dismiss stories of wrongful seizures as unfortunate one-offs, and indeed, law enforcement’s forfeiture proponents frequently make just that claim.

But if this polling data is accurate, and if these results are replicated in other states, then nearly one in ten Americans—more than 30 million people—may be intimately familiar with the travails of the civil forfeiture system. If that is so, we must confront one of two disturbing possibilities: Either America has a truly mind-boggling number of criminals and drug kingpins, or civil asset forfeiture has become an unconscionable miscarriage of justice that is far more widespread than previously thought.

For my money, it’s most likely the latter.