The NAACP’s Hateful Call to Impeach the President 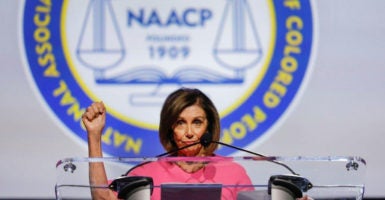 At the 110th NAACP annual convention in Detroit, delegates voted unanimously last week to call for the impeachment of President Donald Trump.

Many NAACP members and liberal lawmakers alike are tenacious about the president’s potential impeachment.

Rep. Rashida Tlaib, D-Mich., known for her dislike of the president, might be more passionate than anyone else. Standing on stage at the convention, Tlaib stated that she is going “nowhere, not until I impeach this president.”

Well, Tlaib might be staying right where she is for a long time.

I couldn’t be further from concerned about whether Trump will be impeached. In fact, I wonder how possible it really is.

Where is the evidence? What are the NAACP’s reasons behind wanting this? It just doesn’t like him? I hate to say it—well, not really—but it takes a lot more than mere hatred to achieve a goal as large as impeachment.

For more than two years, the left has mounted investigation after investigation to try to find evidence to impeach the president. Removing the president from office has been the agenda of the far left since Nov. 8, 2016—the day of the election.

Last week we saw the final hammer dropped on their dreams of impeachment during the two bizarre House hearings for former special counsel Robert Mueller.

The fourth and final expense report is due soon. The first three reports totaled approximately $6.8 million, $10 million, and $8.5 million, respectively. So the last one, if comparable to the others, would make the final dollar amount of Mueller’s probe between $32 million and $35 million.

—Mueller was confused as to both the law and the facts. He did not know, for example, that the special counsel’s mandate did not authorize him to exonerate or not exonerate the president.

—Mueller filibustered by continuously asking that questions be repeated.

—It did not appear that he had written the report, and his legal analysis in many cases was simply flawed.

Because Democrats are unable to impeach Trump on serious, legitimate charges of collusion with Russians or obstruction of justice, they have taken up the banner of hate. They actually want to impeach the president because, they claim, he is a hateful racist. We now have officially entered into the land of the absurd.

Unfortunately for the 11% of Republicans and 64% of Democrats who want to impeach our president, the Mueller investigation did not yield anything new.

It is clear to see that this notion of impeachment, so passionately taken on by the NAACP, is fueled purely by hatred and nothing else. The cries for impeachment without any facts do the nation and the historic civil rights organization a disservice.

Calling racist every tweet from the president may keep the discussion relevant for a while, but it never will be grounds for impeachment.

With no evidence, something seemingly gallant and beneficial for America just turns into a waste of time and money.

A YouGov survey states that 45% of Americans oppose the president’s impeachment, which is more than the 36% that support it. Why don’t we just listen to America?

In the future, the NAACP should try to fight for something it might actually win, such as advocating  policies to help black Americans, that is its mission, instead of rushing into a war doomed for failure—and blindly telling its followers, “It’s all going to be OK.”