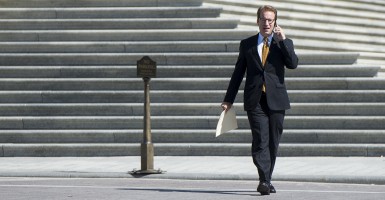 In the aftermath of the targeting scandal at the Internal Revenue Service, one Republican lawmaker is working to protect taxpayers from the agency’s intrusive practices.

Rep. Peter Roskam of Illinois, the chairman of the House Ways and Means Oversight subcommittee, reintroduced two bills today aimed at ensuring taxpayers’ rights, The Daily Signal has learned. The bills, called the Taxpayer Bill of Rights and the Protecting Taxpayers from Intrusive IRS Requests Act, passed the House with bipartisan support in the last Congress, but died in the Senate.

“In a very simple way, the American public has delegated authority to Congress as their elected representatives, who then in turn delegated their authority to the Internal Revenue Service,” Roskam said. “And the Internal Revenue Service now has been abusing that authority, and we’ve got to rebalance that so that the balance is back where it should be, and that’s recognizing that the IRS is there to serve the public, not to be served by the public.”

The Taxpayer Bill of Rights seeks to ensure that taxpayers working with the IRS are informed and assisted, and guaranteed a right to confidentiality and fairness.

The Protecting Taxpayers from Intrusive IRS Requests Act prohibits the tax agency from asking taxpayers about their political, religious or social beliefs.

Though the Taxpayer Bill of Rights did not make it through the Senate, the IRS announced last summer that it would adopt the legislation on its own. The tax agency posted the guidance on its website and at all facilities.

Nina Olson, the National Taxpayer Advocate at the IRS, commended Roskam for reintroducing the legislation and said it’s especially crucial for the Taxpayer Bill of Rights to pass following the scandals that have plagued the IRS.

“After a difficult period for the IRS, a Taxpayer Bill of Rights has the potential to restore taxpayers’ trust in both the IRS and the tax system,” Olson said. >>> IRS Seeks 9,000 New Employees as It Prepares to Enforce Obamacare

Roskam’s office hopes to move both pieces of legislation soon.

The IRS has come under fire from taxpayers and lawmakers in recent years after it was revealed in 2013 that the agency unfairly scrutinized tea party groups applying for tax exempt status.

After filling out applications, IRS agents probed right-leaning groups for additional information, including lists of donors and their contributions, relationships with political candidates and parties, and lists of issues important to the groups.

In discussing the need for the Protecting Taxpayers from Intrusive IRS Requests Act, Roskam cited the experiences of the Coalition for Life of Iowa, a pro-life group that was targeted by the IRS. Officials with the agency asked the group for descriptions of their activities. After learning that the Coalition for Life of Iowa prayed, the agency proceeded to asked them about their prayers and prayer meetings.

“That’s none of the IRS’ business,” Roskam said. “The idea that a federal bureaucrat would make those types of inquiries is something that has to be pushed back against very, very hard.”

Most recently, the IRS was scrutinized for its civil forfeiture practices—an issue further brought to light by Roskam. Under civil forfeiture laws, the government and law enforcement agencies have the power to seize money and property from a business or individual if it’s suspected of being used in a crime.

The IRS has the authority to seize money from parties if they’re suspected of structuring—or consistently making deposits of less than $10,000 in an effort to avoid reporting requirements mandatory under the law.

However, oftentimes the victims are unaware of any wrongdoing.

The IRS’ practices in the targeting scandal and forfeiture cases invite the need for the taxpayer protections his bills provide, Roskam said, as the agency has made a habit of abusing its power.

“What’s even more troubling is the abuse of power, where someone has been entrusted with a power, entrusted with a responsibility, and they’re misusing that,” he said. “And they’re using the power to intimidate someone, to coerce someone or to get someone to do something that they wouldn’t normally have to do. And that is what we’ve seen in these IRS cases. … It has to be met aggressively by Congress.”