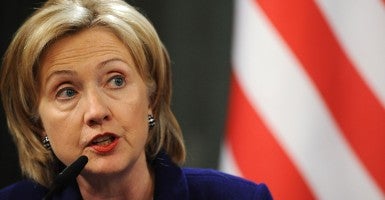 Close to 500 pages of Pentagon Benghazi-related documents obtained last week by the non-profit group Judicial Watch prove the U.S. military was operating on the assumption terrorists killed U.S. Ambassador Christopher Stevens and three other Americans on the night of Sept. 11, 2012.

The papers confirm statements about the nature of the attack to congressional committees made by both then-Secretary of Defense Leon Panetta and then-AFRICOM Commander Gen. Carter Ham.

Judicial Watch has spent two years in dogged legal pursuit of the heavily redacted papers. The lawsuit to obtain the previously classified “secret” documents was filed in the U.S. District Court for the District of Columbia on Sept. 4, 2014, (Judicial Watch v. Department of Defense (No. 1:14-cv-01508)).

Even with the heavy redactions, the documents show the White House-State Department narrative of the Benghazi attack—as a demonstration over a video run amok—to be completely out of sync with the Pentagon. The anti-Muslim video alleged at the root of all the trouble is not mentioned in the Pentagon documents.

The Pentagon papers show knowledge obtained on Sept. 12, 2012, that al-Qaeda-linked terrorists were attempting to establish an Islamic state in Libya and had been responsible for the previous attack on the American compound on June 6, which blew a wide hole in the perimeter wall. This attack “came in response to the 5 June (2012) drone strike on senior al-Qaida leader Abu Yahya al-libi.”

The newly released papers also contain a draft cable to the Joint Chiefs. The cable, dated Sept. 13, 2012, requested additional forces for an “immediate” military response to the Sept. 11 attack, “to protect military and naval assets.” The code name for the operation would have been “Jukebox Lotus.”

As we know, though certain military assets were placed on high alert and repositioned, the order was never executed. No attempt was made at a rescue or a retaliation for the lives of loyal public servants.

Instead, the White House chose to handle Benghazi as a law enforcement matter and gave the investigation to the FBI, which took more than a month to even get personnel on the ground to collect evidence and two years to make an arrest. And today the Middle East is afflicted with a new aggressive brand of terrorism branding itself the Islamic State.

The headline has been modified.