Planned Parenthood Loved This ‘Scandal’ Episode. They Shouldn’t Have. 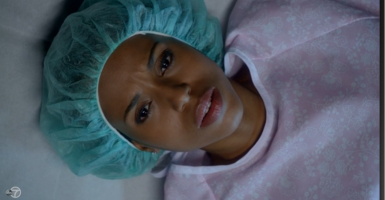 During the episode, we saw Oliva Pope's face as her abortion was happening. (Screenshot from ABC's "Scandal" on Hulu.com)

Planned Parenthood gave the winter finale of “Scandal,” a TV drama about politics, a big thumbs up for its portrayal Thursday of a character’s abortion.

“We saw one of our favorite characters make the deeply personal decision that one in three women have made in their lifetime,” Planned Parenthood said in a statement, per Entertainment Weekly. “We applaud [“Scandal” showrunner] Shonda Rhimes … for proving that when women are telling our stories, the world will pause and watch.”

Others also applauded the episode, which additionally featured a storyline about a female senator filibustering in order to preserve non-discretionary funding for Planned Parenthood.

“One of TV’s most beloved characters gave us an honest look at a positive experience with abortion,” raved Slate’s Christina Cauterucci.

“Millions of viewers watched a beloved character exercise her right to choose as just one of the things she did that day,” wrote The Huffington Post’s Jessica Samakow, adding that “though nearly 3 in 10 women will get an abortion by the time they’re 45, the topic is rarely discussed in pop culture… [this] perpetuates the myth that the procedure is rare and contributes to the stigma surrounding it.”

But when you watch the scene of “Scandal” character Olivia Pope getting an abortion, it doesn’t feel like cause for a celebration.

We see Olivia, completely alone except for the doctor, lying on a hospital bed in a medical office. As “Silent Night” plays in the background, the doctor picks up a scraping tool, bringing it between Olivia’s knees as she performs the procedure. Olivia reaches and grips the plastic rail of the bed before opening her eyes. The camera then pans over her face as she swallows and blinks, remaining resolute.

While this is happening, the voiceover is Olivia’s father, speaking to someone else.

“Family is a burden,” he intones, adding that family is “a pressure point, soft tissue, an illness, an antidote to greatness.” He continues:

You think you’re better off with people who rely on you, depend on you, but you’re wrong, because you will inevitably end up needing them, which makes you weak, pliable.

Family doesn’t complete you. It destroys you.

This is the message that’s supposed to show abortion is normal and fine: that if you buy into the idea that family destroys you, an abortion is a great idea?

It’s almost as though Shonda Rhimes is a closet pro-lifer.

There is, of course, a kernel of truth to Olivia’s dad’s words. Sometimes it’s not easy to need people. Sometimes it’s a real burden to be needed by others. Sometimes family does make you weaker, because sometimes love makes you weaker: Caring about someone more than yourself is not exactly the route to power and control.

But most of us would rather take the weakness and have a family. Olivia Pope comes from a horrifically dysfunctional family—her mom, for instance, is a terrorist—and it makes sense that her character would agree with her dad’s words that family is “a pressure point, soft tissue, an illness, an antidote to greatness” and would believe that so strongly that she feels it’s necessary to abort her own child.

But for most of us, hopefully from families at least somewhat less dysfunctional, that’s not how we see family.

And the playing of “Silent Night” in the background only makes Olivia’s abortion more poignant. While the rest of the world is being festive, is celebrating family and joy, is wondering at the coming of a “holy infant, tender and mild” to redeem the world, is hopeful, Olivia—who is, again, alone in this scene—is allowing the annihilation of a life within her because she’s presumably terrified that her own unborn child, her own family, can be nothing primarily but a force for weakness, for destruction.

Sure, the rest of the episode features some Planned Parenthood propaganda. We see women banding together to make sure Planned Parenthood stays funded for the next year, led by a female senator and abetted by a female vice president. We hear the tired old canard that abortions “only make up 3 percent of all Planned Parenthood business.” (The Washington Post fact-checked that claim in August and declared the statistic “misleading, comparing abortion services to every other service that it provides.”) We are preached to about Planned Parenthood and women’s health, and we don’t hear that there are 13,540 clinics that could help low-income women if taxpayer funding for Planned Parenthood was ended.

But in the end, that’s fairly irrelevant.

Because ultimately, I bet most viewers won’t remember the filibustering scenes or the political chatter about Planned Parenthood.

Instead, they’ll remember the episode’s most emotional moment: Olivia getting an abortion, all by herself, holiday music overheard, her dad’s voice denouncing family as a “burden.”

I don’t know what story Rhimes, who serves on the board of directors of Planned Parenthood Los Angeles, and the “Scandal” writers set out to tell. But the one they ultimately told is the true one: Abortion is a tragedy—not just for the unborn children whose lives are lost, but also for the women who have abortions.