Tips for Politicians: How to Not Have an ‘Uh-Oh’ Moment at CPAC 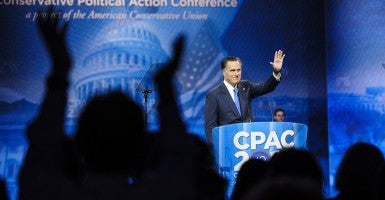 It’s that time of year again – the week when conservative activists and politicians convene in the Washington, D.C. area for the annual Conservative Political Action Conference.

Anyone who has attended CPAC knows it’s a feat of endurance. Only the tried and true politico sits through hours upon hours of speeches. And since the repetitive nature of liberal policy bashing can wear out even the most die-hard conservative, speakers have often resorted to props and prose to motivate or energize the crowd.

The problem? Whether planned or ad-libbed, some attempts have fallen short and left either the CPAC audience or the at-home audience shaking their heads at the sound bite aftermath. Here are the “uh oh” CPAC moments that the mainstream media circulated and the lessons learned.

Mitt Romney’s gift is, well, not public speaking. Before ever uttering his infamous 47 percent sound bite, he had another speaking blunder while addressing the CPAC crowd in 2012.

Wait. Can someone be “severely conservative?” No doubt he was caught up in the moment, but his ad-lib adjective was confusing and did little to convince us. It’s kind of like hearing a politician say, “trust me.” If you have to say it, there’s a problem.

The lesson learned? Stick to the script; otherwise, you might get yourself into a “severely” tricky mess.

Mitch McConnell Not on Target

Speaking of mess, let’s jump to last year’s CPAC and the awkward moment when then-Senate Minority Leader Mitch McConnell (R., Ky.) presented a rifle to retiring Sen. Tom Coburn (R., Okla.). In doing so, McConnell proved one thing: he probably should get a lesson on how to hold a gun.

Someone tell @Team_Mitch that’s not the way to hold a gun. KY women do it better. #kysen

This falls into the “never be something that you aren’t” category. Be authentic.

While some memorable moments can be labeled under “gaffe,” others are planned. Enter two women who are no strangers to CPAC or controversy.

Sarah Palin’s one-liners often make the news, but rarely for the right reasons. In her 2013 CPAC speech, she not only brought a Big Gulp on stage, but she also made a joke about, well, her “rack.”

While funny, the widely circulated clip did little to combat the narrative that the Republican Party is sexist. If you’re going to make a joke, please make sure that it is funny and in good taste.

Ann Coulter knows how to make news, and her shock-value comment about John Edwards at the CPAC 2007 was par for the course.

While we have free speech rights in this country, it is never wise to call people names or assess motive. You only have to look back to Rudy Giuliani’s comments last week on President Obama’s love of America, or lack thereof, to show that it is very controversial to do so. In general, stick to attacking policy, not people.

It will be interesting to see what CPAC sound bites circulate in 2015. Will the mistakes of the past serve as teaching tools today? If so, we’ll likely be left with an “aha” moment instead of an “uh oh.”