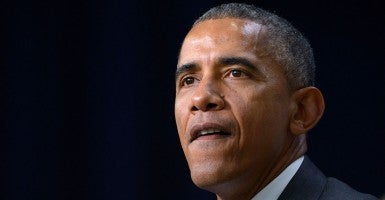 The news sparked varied reactions on Twitter. Here are some of the tweets that caught our attention.

a legal injunction against Obama's amnesty is good, but it doesn't mean lawmakers can sit back. House-passed DHS bill still essential.

The appeals process could take a year. Why block DHS Bill over funding they can’t use until then? Will reporters ask Democrats this?

It's Democrats who are threatening to disable our entire DHS, because there is no funding for illegals in the bill. good! #DefundAmnesty

Height of irresponsibility for Dems to block DHS funding to protect Obama's amnesty—which a judge has ruled illegal! http://t.co/Q5U5UYKLDV

Don't expect to see Republicans back down on DHS funding after court ruling against executive amnesty. http://t.co/Xlp5ePm5li

Seems that GOP case on DHS funding is even stronger after the ruling. Why would Dems hold DHS hostage for something court blocked anyways?

Indefensible for Democrats to block DHS funding to keep Obama's amnesty that a court has now blocked in a majority of states. #JustfundDHS

On DHS Funding, GOP Doesn’t Deserve the Blame (But Will Probably Get It) http://t.co/Ha4Q73GV3K via @sharethis

The obvious compromise here is to pass a DHS funding bill that allows DACA to continue but stops DAPA from starting http://t.co/5owXAiYwd4

Boehner’s bogus DHS blame game: Boehner faults everyone but himself for the loom http://t.co/tiCmVFwTMA via @sharethis

Only 46% of Republicans would see DHS shutdown as a crisis. Could only imagine how much higher that # would be with Bush as president

Just FYI..DHS is "shut down" today in the same manner it would shut down at the end of the month. 3 inches of snow #defundamnesty

The president overstepped his executive authority & hurt the effort toward a commonsense immigration solution https://t.co/rO49CgtaZS

Republicans Just Got a DHS Shutdown Lifeline. Will They Take It? http://t.co/UX6Nm5O7YT

The Department of Homeland Security is a total disaster. It's time to abolish it. http://t.co/4S1sMKiPgC via @DLind

Must stand firm because states + US will “suffer irreparable harm” if @BarackObama is allowed to trample Constitution http://t.co/Gqa5C5WJJf

Hopefully, Senate Dems who claim to oppose this #immigration overreach will now let the Senate begin debate on our bill to #FundDHS.

Schumer: Despite court decision, Dems still "united" in view that DHS $$ "should not be used as a ransom by Republicans, period.”